Over a year ago, I received a recommendation to check out Flo's Airport Cafe in Chino. It's a diner by the airport and by the prison. It really should have been at the top of my list, but for whatever reason, I only just recently made it out to this little gem.

Photog Chu, Dinerpal Paul and I busted our way out of the city and into the barren wastes of Chino. We followed the banners hung on the chain link fences along the main road. We turned left at the prison and right at the airport. The thought process that went into putting a prison next to an airport is beyond me. 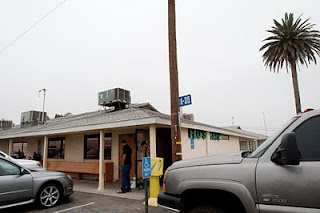 It was a busy morning at Flo's, but I imagine every morning is busy at Flo's. It's a local's place. Even with the signs on the main road, you really aren't going to stumble upon it. Even when you pull into the industrial park where it is located, it is not abundantly clear which of the nondescript buildings it is. You can only figure it out by the cluster of people waiting outside.

We waited for a few minutes outside. I flipped through the pages of an airplane parts magazine called Trade-A-Plane, which seems like the Penny Saver of airplane enthusiasts. Seriously, 100 pages of parts and planes for sale. Factory Refurbished Magnetos only $667! 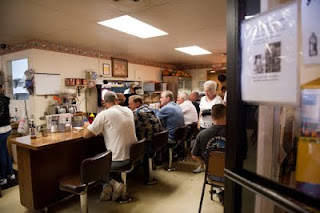 Inside of Flo's deceptively large interior, the walls are decorated with a hodge-podge of pictures and posters, a lot of which are of horses and planes. I got the odd feeling that Vietnam vets eat here. There were also a lot of printed signs hung up with messages like "Ice Cold Water $1.00." 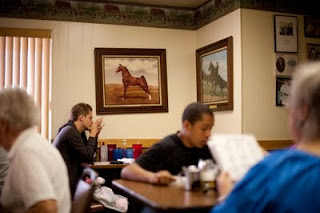 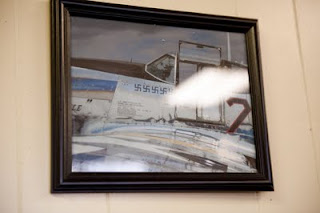 When asked what she thought was the best item of the menu, our waitress was thrown for a loop. "I couldn't even begin to answer! It's all good." Now, I am seasoned enough at this review game that I can tell a fibber. Her answer was just a variation of the stock answer I usually get. But, she was telling the truth; whether or not we would agree with her still remained to be seen.

We looked over the menu--which charmingly used a lot of clip-art--and it covered all the standard diner faire. We were intrigued by the "Red Cup Orange Juice," so along with our coffee (which was good by the way) Charlie ordered it. I predicted that it would come out in one of those Christmas Red Coke glasses you get at pizza parlors and lo and behold: 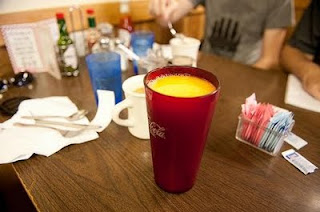 Check that out! I called it. 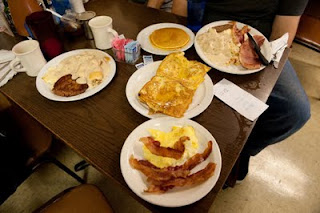 The food breakdown: Charlie ordered the Corned Beef Hash and Eggs. I ordered the French Toast Sandwich, which Flo calls the Fran Sam. And in a dramatic twist, Paul ordered the Paul's Platter. 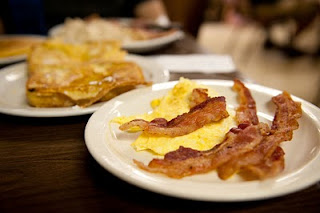 The gigantic french toast had a pretty interesting feature. The top slice of bread had an indentation in it that the butter (well, margarine) had pooled into. It provided a delicious dipping area. The bacon was salty, fatty, and good. 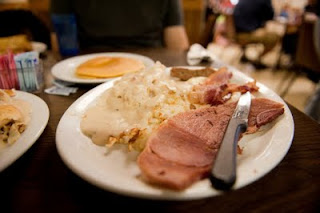 The hash browns were really good. The potatoes were thin cut and just the edges were crispy. The gravy that covered them was a little thin. The ham was delicious. The breakfast sausage was decent. 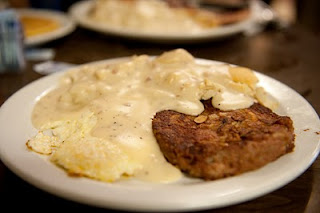 The corned beef hash was oddly rectangular, but still tasted good. Shape doesn't really effect flavor. Just don't tell the Japanese, they have a big market for that kind of thing.

The crowd at Flo's was very chatty. There were dozens of boisterous family meal conversations going on. The most exciting one that we could hear was by the Chino prison guard and his family seated behind us. He shared a few fascinating stories with his family--delightful tales of tasering a dead prisoner and a recent suicide by a Chino cop. Fun times.

At the end of our meal, we were all stuffed and satisfied. It didn't blow us away, but it was good. I wouldn't make the trip all the way out for just the food, though.

When I went up to the counter to pay--$32.57 for the three of us, so not too shabby-- I noticed the dry-erase board that listed their pies. I counted over fifteen types of pie. I felt like Bowman in "2001." My god, it's full of pie. There was one kind of pie that I didn't recognize on the board: Millionaire Pie.

It's basically a layer of cream cheese over a pecan pie. Decadent and rich. Get it! 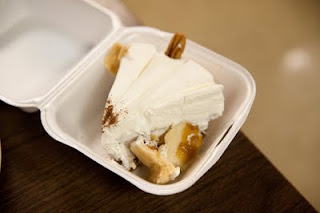 So if you are ever flying a small plane out of Chino or visiting your dad at the prison, go ahead and enjoy a fine meal at Flo's Airport Cafe. 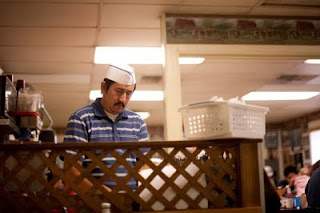 This is just a beautiful picture. I had to include it.

Actually, I ordered the french toast and you ordered Paul's Platter.

Hello !.
You may , perhaps very interested to know how one can collect a huge starting capital .
There is no need to invest much at first. You may begin to receive yields with as small sum of money as 20-100 dollars.

AimTrust is what you haven`t ever dreamt of such a chance to become rich
The company incorporates an offshore structure with advanced asset management technologies in production and delivery of pipes for oil and gas.

It is based in Panama with offices around the world.
Do you want to become a happy investor?
That`s your choice That`s what you wish in the long run!

I`m happy and lucky, I began to get real money with the help of this company,
and I invite you to do the same. If it gets down to select a proper partner utilizes your money in a right way - that`s AimTrust!.
I take now up to 2G every day, and my first deposit was 1 grand only!
It`s easy to start , just click this link http://vecafokygi.angelcities.com/fegufim.html
and go! Let`s take this option together to become rich

I'm up for Flo's but not interested in investments in Panamanian ???

What the hell? Anonymous, I keep telling you- I don't like Panamanian schemes. I prefer Nigerian schemes!