A Tale of Two Diners – One City

Taking a long weekend trip to San Diego a few weeks ago, I decided to hit not one, but two of the area's better known diners. 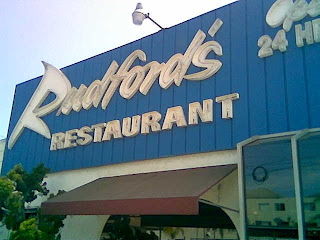 Rudford’s Restaurant had all the indications of being a great place to eat this kind of food; old timey sign, sketch neighborhood (a strip club and a restaurant named "Lips" are just down the street), open 24 hours, and the elderly dining inside. Unfortunately this turned out to be quite the disappointing experience.

Three of us walked in on a Sunday morning around 10:30. There was only “a short waiting list”, the bubbly pregnant girl at the counter informed us. At the end of the counter we saw three empty spots. I told her we’d take the counter seats and was told in that sing-songy way that only a pregnant woman should be able to get away with that we could not. We were handed menus so we could spend our time wisely. 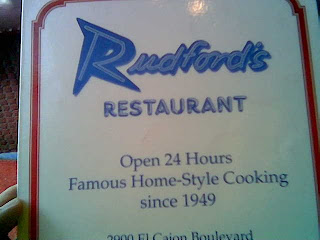 It wasn’t too long before we were called up and led, past the still empty counter seats mind you, to our booth. The booth itself was large and comfy with a nice window view of the apartment construction next door.

We were then greeted by Mean Ol’ Lady Madge. I don’t know her real name but MOLM was to be our waitress and she was as old as cantankery itself. This is the kind of waitress you want at a diner usually, she had character. You want to get a sense that underneath the mean ol’ ladyness is a heart of gold there to serve you lunch. Madge had no heart of gold; she had a heart of rusty sheet metal, which had been rusted by years of hobo piss.

When Patrick, one of my companions, asked if he could get the garden burger with a side of half french-fries and half cottage cheese, her reaction was priceless. Granted, that is an odd request, she, however, took it to a whole new level. “No!” she snapped, with a look of sheer incredulity. “The kitchen would toss me out into the street.” Geez, if the kitchen staff is so cruel, how could we expect our waitress to not be withered by such an environment?


Antoinette ordered the tuna melt with potato salad and I took a chance on ordering the Eggs Benedict with a side of home fries. I also warned MOLM that I’d order pie after we ate our lunch.

Then Mean Ol’ Lady Madge finally brought out our food. The review of that food goes like this: 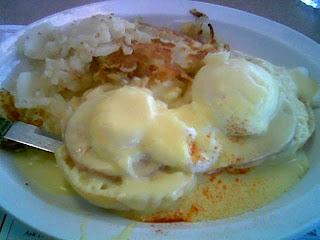 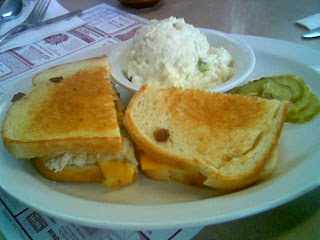 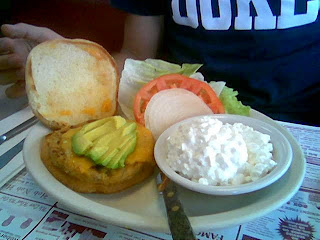 “These potatoes are cold too.”

“My potato salad is nothing but relish.”

So cold food, not so great garden burger (but really, how good is a garden burger going to be anyway?) and potato salad that was nothing but relish. We hadn’t eaten breakfast before heading out and by now it was almost noon, so we did a good job of cleaning our plates. This was more out of necessity than choice.

Eventually, after another glacial age, MOLM dropped off our check without saying a word and disappeared into an AARP limbo. I would have liked to have tried their pie. They seemed like they’d maybe have a good selection. And hey--Jello was on the menu too. 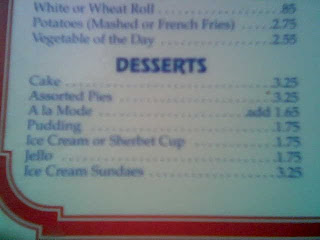 Since this whole excursion was my idea, I felt responsible for our all-around disappointment. I decided I wasn't going to let us wait any longer for MOLM to come back and take our money. We took the check up to the front, again passing the three empty seats at the counter. I left an 8% tip and we skeedadled.

I do not recommend Rudford’s.

On the other hand, I can recommend the Studio Diner in northern San Diego. 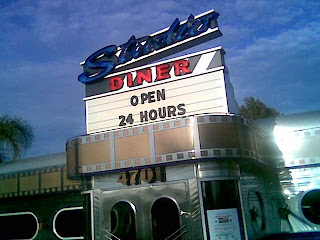 I was a little nervous finding this place. I was going this one solo and was using badly transcribed directions from the restaurant information booth at the San Diego Convention Center. The ladies at the booth went above and beyond the call of duty to get me directions to this place. When it was oddly missing from the phone book, they called the studio next door (from which the diner gets its name) to find out how to get there.

I drove through a deserted industrial park looking for this place. I almost missed it on account of the distraction of the Jack in the Box Product Development Center being located across the street. [I once carried on a torrid online romance with a girl who worked at the Taco Bell PDC. The chalupa was based on an old family recipe of hers- I digress] You may recognize this place if you were a fan of the late, (I heard it was-) great Veronica Mars, where the Studio Diner was used for filming.

This is a diner done in the traditional East Coast diner style. That pretty much means long and narrow with lots of shiny metal. Check out the interior- That's shiny! They also boast an East Coast specific section of the menu with crab cakes and clam chowder. 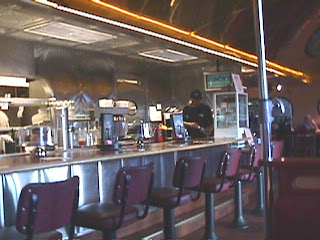 The friendly waitstaff of college-aged brunettes (I swear to G-d, they were all brunettes) greeted me and were sweetly attentive, like in some school boy's dream. The girl who wasn't my waitress but still in the same section would stop by and check in with me from time to time. I ordered a diet coke and I swear everytime I was setting down an empty glass, a fresh glass was being set on my table.

The Studio Diner plays up its "studio" theme by having things like the "Grip Burger" (it's just a burger, seriously), the "Crew Sliders" (which are four mini-burgers) and the "Studio Toast" (Texas toast topped with powdered sugar). The ladies at the restaurant information booth heard that the fish and chips was the best thing there. I rarely feel like fish and chips but I decided to just go for it. Live a little, y'know.

And this is what I got- 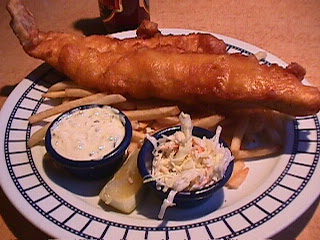 Check that out! Despite the murky lighting, I would say that what I was actually served looks better than the promotional shot. That's a whole freakin' cod, minus the gross parts with eyes and fins. This fish was delicious, probably one of the best deep fried cods I've ever had. Not greasy at all and still maintained the flavor and flakiness of the cod, where often the fish just turns to mush. The fries were thin-cut and there was just the perfect amount of them. The tartar sauce was either homemade or the best store bought tartar sauce I've ever tried. The little dish of coleslaw was a curiousity. It was only about three of four fork fulls so I was left feeling- "Well, um gee thanks." The meal was filling. I left a good 1/4 of the fish on the plate and could not take another bite.

I was somewhat relieved by my fullness, because I was still jonsing for some pie since Rudford's robbed me of the pleasure. The pie at Studio Diner is rather pricey. 6 bucks for a slice! Egads! That would have put my diner dinner at over 20$.
That apple pie did tempt me though. It rested on the counter under a glass dome like Snow White waiting for a kiss- or rather large bite- from me. In the end I declined. 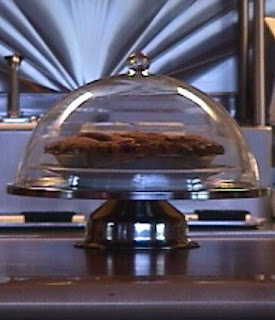 And now for the stats.