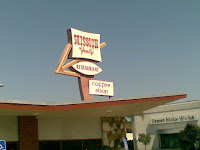 "Hull House, which opened in 1958, became Mission Family Restaurant in 1971 and gave up the ghost in 2013. Days before the end, Clifford and I met for a commemorative last breakfast. (It was like the Last Supper, but with hash browns.)
Nearly five years later, the vacant building is poised for a new lease on life — but not as a restaurant.
A developer will convert the restaurant into a 7-Eleven convenience store. His plans include keeping much of the facade intact.
“They decided they were going to honor and preserve what I consider a wonderful example of historic Googie architecture,” Clifford told the Planning Commission on Wednesday night."
Keep Reading.....
Daily Bulletin article....

Posted by Mike Tanner at 9:42 PM No comments: