I'm going to make you a promise in this review: I will not make any references to the Steve Guttenberg films. 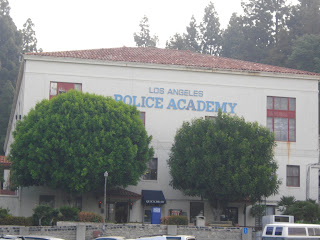 My friend Dan, who you will remember from Eatwell and the oft-plugged Banana book, told me about the coffee shop at the Police Academy up by Dodger Stadium, and we decided to go for breakfast last Wednesday morning. It had been some time since he had been there and was a little foggy as to where it was located on the grounds. We parked outside and did just as I had learned from childhood Bernstein Bears books: when lost, look for a police officer to help. One was easy to find since literally everyone in a square mile of us was a cop.

The coffee shop is actually on the grounds of the academy. We were pointed in the right direction by some nice officers and proceeded through the stone gates of the academy. Ever hear gunshots at 7:30 in the morning? Lots of them? I lived in Glassell Park so that was nothing new to me, but the sheltered may find the continuous rapport of gunfire from the nearby shooting range to be a tad disconcerting. 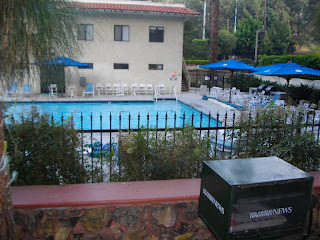 We found the coffee shop right next to the swimming pool. 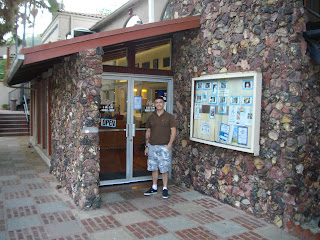 It has beautiful stone work on the outside and on the inside. The walls are covered in LAPD memorabilia: staff photos from different precincts, graduation photos and pictures of neighborhoods as they once were. You can make out the famous Norman Rockwell painting of the kid and the cop on the wall in the photo below. There is also a golden shovel on the wall commemorating... something. We didn't get close enough to read the inscription. 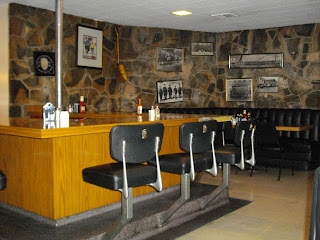 It was immediately after taking this picture that our waitress told me I was "breaking every rule" and there were no pictures allowed. What was she gonna do? Call the cops on me? Oh wait. Literally every other patron in the place had a badge and a gun...or at least a gun and was working toward getting a badge. I put away my nice digital camera. That's why there are only two more pictures in this piece. I had to be stealthy.

The menu has a lot of little cutesy cop names for dishes. "The Range Burger" and the "Academy
Special" (which is what I eventually settled on) are good examples, as well as more specific shout-outs with the "Bratton Burger" and the "Hollenbeck Huevos Rancheros." Everything was under eight bucks.

About two minutes after she admonished me for the picture-taking, our waitress came back to take our order. We asked for more time and got an incredulous eye roll. We wouldn't see her again for almost ten minutes. That taught us! Perhaps she was so used to regulars who order the same thing or know the menu by rote that we threw her off her game.

So the Academy Special was two pancakes, two sausages, two eggs and choice of potatoes (home fries or hash browns). 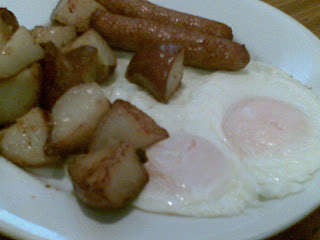 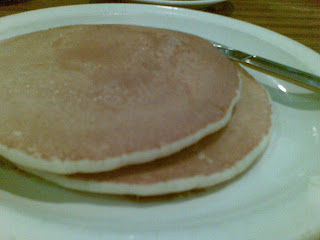 The pancakes were pretty good. I ordered my eggs over easy for a change of pace, and I realized that I don't really like over easy. The sausages were typical Jimmy Dean variety. The potatoes were good, but not really home fries the way I think of them from a restaurant--no onions and no peppers. They were what I'd make at home, just saltier.

Now, Dan ordered the Spanish Omelet. The picture I snapped of it didn't turn out. Rest assured it was as serviceable as my meal was.

A place like this caters to a very select clientele who, I imagine, want cheap and hearty meals. Los Angeles Police Revolver and Athletic Club delivers this in a convenient location for the local police. As a normal citizen, you are basically eating in the safest place in town. That's a really interesting feeling. I could whip out a wallet full of hundeys and flash it around and not worry about getting followed to my car and beaten. At least, I think so. Those waitresses did look a little shifty.

I was underwhelmed by the food, but it's definitely one of the most out of the ordinary breakfast spots in Los Angeles, and for that alone, I will recommend it.

I'll tell you a story--a story with pictures and few words. 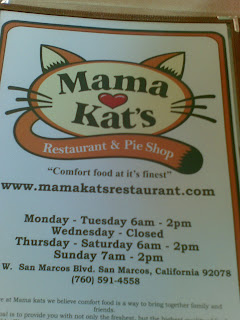 Mama Kat's likes cats. Mama Kat's doesn't like to be open at night. Or Wednesdays. Is Mama Kat lazy like a cat? 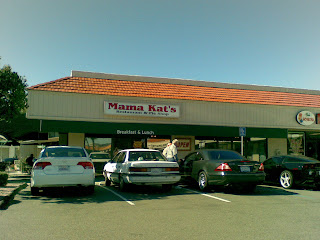 Mama Kat's is located in a strip mall in San Marcos. 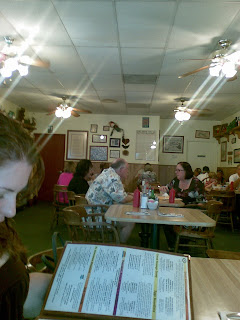 Inside, it is very friendly and the lights are extra bright, like stars. 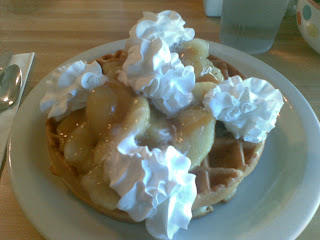 Their apple waffle was very delicious and covered in whipped cream. 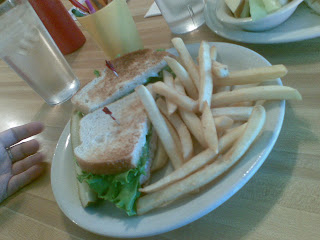 Their chicken salad sandwich was very good. The fries were very crispy and not at all greasy. 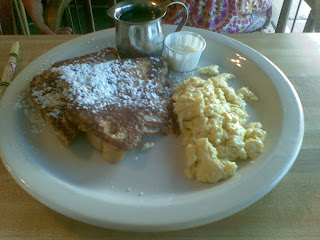 Their French Toast was very good and the eggs were wet and lumpy like my mom makes. I mean that in a good way. 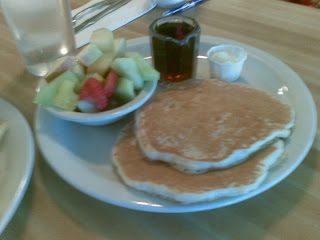 Their pancakes were tasty and the fruit salad was better than you'd expect. 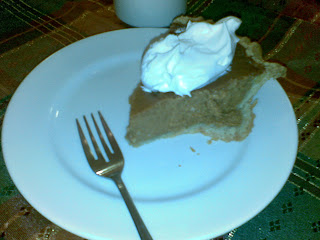 Their pumpkin pie was slap-you-in-the-face-for-disrespecting-your-mama good! We wanted to take one home. But they were all out. :( 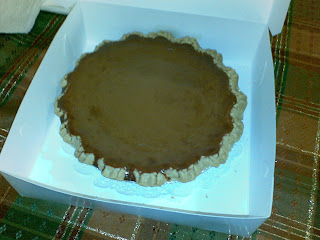 So they baked us one! They baked a pie just for us.

We also took home two slices of other pies. 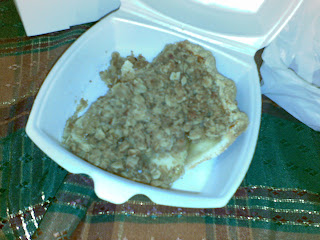 Their apple pie with oatmeal crust was SO GOOD! 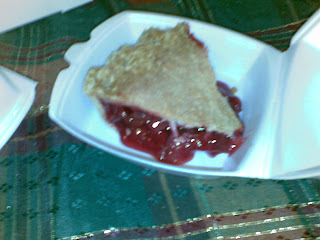 Their cherry pie was SO GOOD! I don't even like cherry pie! Seriously, I have lobbied for the removal of "Cherry Pie" as a pie. This changed my mind.

Mama Kat's was a delicious find. It was homey and lovely and sweet. It was like going to your mom's house for a nice breakfast or lunch.

Posted by Mike Tanner at 9:43 PM No comments: 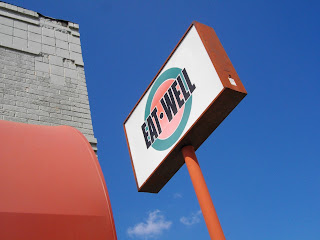 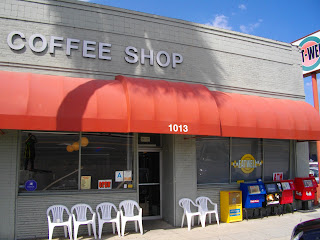 Eat-Well is another staple of the Los Angeles breakfast scene. With two locations (formerly three) in two very disparate parts of the city, it can serve as a readily available morning and lunch spot for just about anyone. I've passed by the West Hollywood location but have never stopped in. (See the Silver Spoons review for reasons why.) I've had plans to go to the one in Glendale ever since moving nearby, but I had not made it there until last Saturday.
My friend Dan, who--let me plug it one more time--wrote the fascinating book, Banana: The Fate of the Fruit that Changed the World, is a big booster of Eat-Well. He says he comes at least once a week because he loves it so much. Dan knows a great deal about the history of the restaurants, like why the Silver Lake location closed a few years ago (technically a franchise that was mismanaged) and how the Brite Spot kiped a lot of its dishes from the original Eat-Well menu.

We went early, sneaking in the back door a little past ten o'clock. By eleven the place really fills up and hungry customers spill out onto the street. We waited a little bit while the staff cleared tables and rung patrons up at the cash register.
While we were seated, I took in the atmosphere at Eat-Well. The large east facing picture window at the front allows the sun to spill into the dining area. That coupled with the high ceilings gives it a very airy and comfortable feeling. 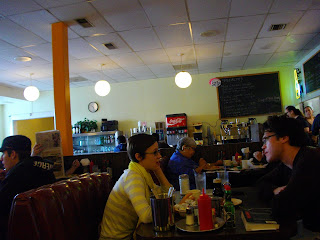 One of the homey perks of Eat-Well is that kindly old Ida, the owner, who is known for her delicious coffee cake, is often found dishing it up for you herself. 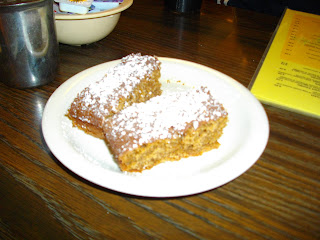 No Ida this morning though (probably at the West Hollywood location), but we still got two pieces of coffee cake. I rarely have coffee cake so I can't gauge how good it is in the context of other coffee cakes, but I really liked this. It was nice and spongy. 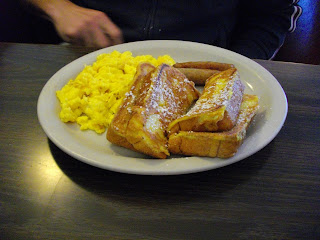 Dan of course liked his eggs and french toast. He did admit it was a little off that day, and is usually knock your socks off good. 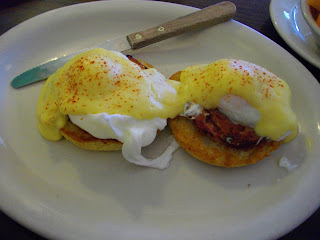 My eggs benedict was very good. My only critique is that it could have used more paprika to give it a 'kick'. Otherwise, the hollandaise was very creamy and not at all oily or fatty tasting. The eggs had a strong flavor and the yolks were nicely runny without seeming completely raw. 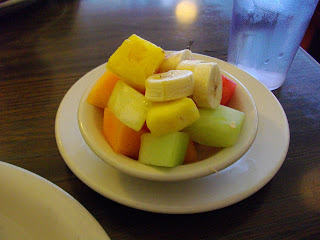 The fruit bowl that accompanied my entre was 50/50 . The bananas and pineapple were very good, but the melons were bland and mushy.

Now came dessert. The menu boasted both cake and pie in the dessert section. I asked the waiter what pies they had. He looked at me oddly and said "We don't have pie." I was agape; I was aghast. Could things have turned around so fast? Where was the pie promised in the menu? I brought this to the attention of the waiter. He replied, "I'm kind of new. Let me check." He checked and returned. No pie.