The Horseless Carriage: Buy a car, get some pie...or not.

The American auto industry has been in the news a lot lately. For once, a diner review is somewhat topical. The Horseless Carriage Restaurant is a unique type of diner. It's unique because it is in a car dealership--the Galpin Ford car dealership in North Hills, right next to the 405, in the heart of the Valley. 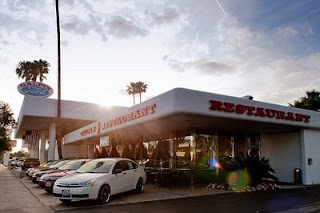 Yes. A car dealership's own diner. It opened in-well, why should I tell the story? Let's let Mister Galpin tell it. 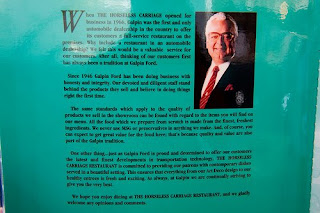 For a closer look at the pic, click here.
For this visit, I brought #1Diner Companion Antoinette, #1Diner Photog Charlie, and #1Gwen Stefani Fan Cammie. Cammie grew up in the area and her parents always bought their cars from Galpin. The salesmen would give the kids tokens to take to the restaurant to exchange for sodas. Only one salesmen still does that, Stuart Sank, according to our waitress, and you should totally buy your car from him because of this.

One thing we noticed about the Horseless Carriage was that the interior was immaculately clean. The stainless steel and faux-deco fixtures gleamed and sparkled in the summer twilight. This was, hands-down, the cleanest diner I have ever visited. 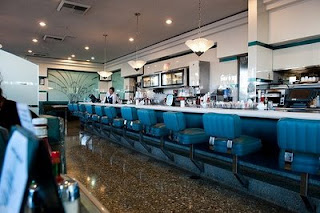 We started with coffee even though it was 7pm on a Sunday. I wasn't expecting much and was pleasantly surprised at how good the coffee was. So far we were off to a good start.

Looking at the menu, I noted that it covered a lot of the basics but wasn't overwhelming. There was just enough of every category to give some variety but without any 'wastes.' I feel like a lot of restaurants have 'wastes' on the menu--dishes that you just can't imagine anyone actually ordering...like the salmon at House of Pies. 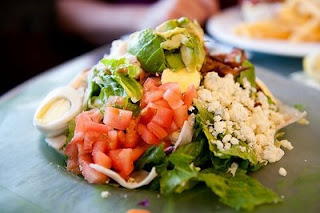 Cammie ordered the Cobb salad. Which looks absolutely beautiful in that picture and tasted just as good. 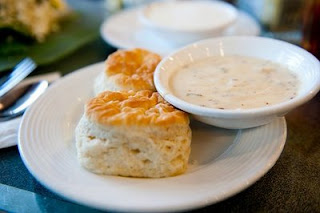 Cammie also ordered a side of biscuits and gravy for the table, just to try it out. The biscuit was good--not great, and the gravy was a little watery. 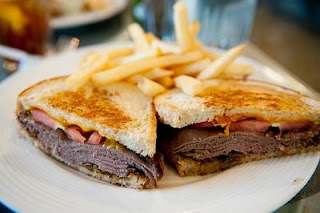 Antoinette ordered the Sourdough Special and cup of french onion soup, but they were out of soup, so she just got the sandwich. The sourdough special is basically the beefeater at House of Pies or a beef melt at other places. It's roast beef, tomatoes and cheese melted on sourdough. It was good, but not as good as other versions of it that we've had. 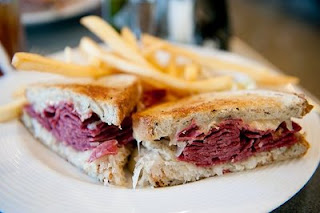 Charlie and I both went with the reuben. It started out alright, although it was a little dry. Charlie had the wherewithal to order sides of thousand island dressing. Once we were able to really slather them with sauce, the enjoyability of the sandwich went up considerably. 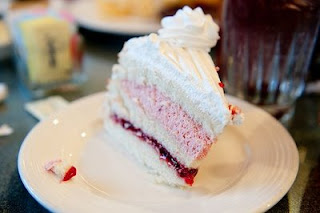 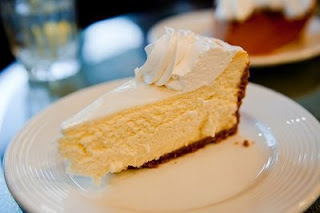 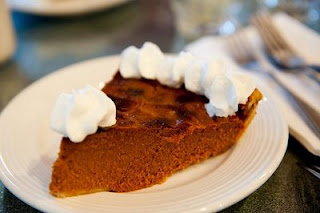 We all ordered desert, well three deserts for four people. #1DC and I were going to split the pumpkin pie, which was the only pie they had left that day. Cammie ordered the cheesecake and Charlie ordered the strawberry cake. Charlie was the winner. The cake was especially pretty and delightfully sweet. It could have been a little fluffier, but was good overall. The cheesecake was decent but unspectacular. Our pumpkin pie was, well--it was a piece of pie that tasted like pumpkin, but not pumpkin pie. There seemed to be no nutmeg, no cinnamon, no spices. It just tasted like mashed up, kind of burnt, kind of soggy pumpkin on a pie crust.
In addition to the pies and cakes, they have something called the "Galpiccino." This consists of coffee ice cream, mocha powder and milk, blended with ice and topped with whipped cream. Just for the name it deserves to be ordered...just not by us... at least this time. And of course they had jello and whipped cream. How could they not?

With only a few minor bumps along the way, from the coffee all the way through to the end, it was well worth the drive. The only truly disappointing part was the pie. Even forgetting that it is probably second only to the Police Academy diner as far as unique locations goes, I can truly recommend the Horseless Carriage for a great experience.
Food: Good.
Service: Very friendly and helpful.
Price: $6-$11 with dinner entrees being a tad more.
Pie: Various cream pies, fruit and pumpkin. Stay away from pumpkin.

Again, special thanks to Charlie Chu for his great photography. He is available for weddings, bat mitzvahs and celebrity funerals. 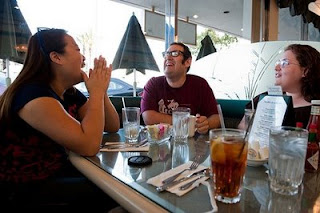 Continuing our Memorial Day vacation adventure, which last time took us to Jerry's Coffee Shop, we found ourselves in Morro Bay on the central Californian coast.


The desk clerk at the Motel 6 recommended Fred's as having the best breakfast in Morro Bay. Having had one of the worst dinners of my life the night before, my expectations for the food in this town were very low. 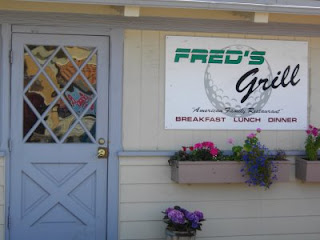 I normally wouldn't have been drawn to this place. The exterior looked homey with the flower boxes and beige paint job, but the golf ball on the sign was a sure indicator that something odd was going on. The "Grill" in the name didn't set my mind at ease either. "Grill" always makes me think of bar food and hamburgers. Or the Macaroni Grill, which is just plain stupid. 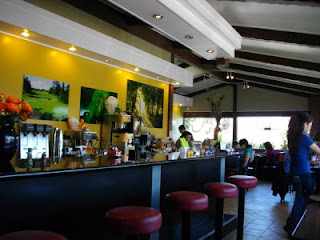 Inside it was quite odd. There were various golf themed pictures on the walls and golf tchotskies on the table tops. I did not like it because I do not like golf. I also had no clue if golf was a thing in Morro Bay (apparently it is: "a poor man's Pebble Beach"). I don't remember seeing a golf course around town (apparently there's about four within a few miles).

The counter seemed more like a bar's bar. In fact, the whole place had a vibe of sports bar trying out a breakfast menu. I've come to find out through my keen detective skills--okay, okay, I just called and asked--the opposite is true. Fred's started as a breakfast joint and expanded all the way to dinner then, because of the economy, scaled back to being a breakfast joint. Although the outside didn't change, I imagine the inside decor had been altered to reflect the new emphasis, but then never changed back.

The service was very nice. We took a long time to order since we were trying to juggle planning the rest of our trip, making notes about what had already occured, and then trying to figure out if we wanted to split something or not. We were annoying, scatter-brained patrons that morning but our waitress handled it fine. 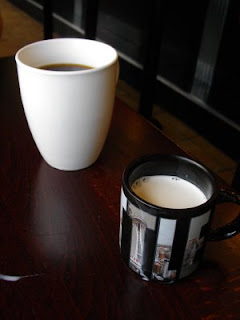 We started off with some coffee. It was quite possible the worst coffee I've had in recent memory. It was oddly metallic and bitter tasting, and had to be drowned in cream and splenda. 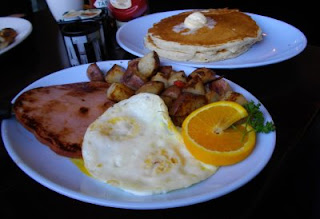 I ordered a hearty breakfast with pancakes, eggs, potatoes and ham steak. I had been spoiled with damn near perfect pancakes the day before, but these were still very nice restaurant pancakes. My potatoes were a bit salty as was my ham steak. The ham steak was also very thick, which was nice. My eggs, ordered over-medium, were fine except for the orange flavor transfer from the garnish. 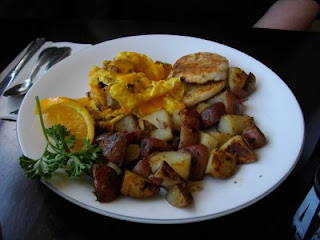 #1DC Antoinette ordered a sausage and cheese scramble. The scramble was too cheesy but the sausage was good.


Fred's Grill was perfectly fine. The only bad part was the atrocious coffee. The place did lack any of the charm that I seek out in diners and coffee shops but it quite possibly is the best breakfast place in Morro Bay, and you know, good for them.

Food: Good.
Price: Reasonable.
Service: Very nice.
Pie: "Peach and Apple, but not all the time. And chocolate cake."

On our way out of town for the recent holiday weekend, #1DC Antoinette and I had planned to go to the historic Munch Box in Chatsworth. Being crazy Huell Howser fans and having just watched the episode where he went there, we were really looking forward to it. When we arrived, though, the place was shuttered and there were no signs of it opening soon or ever again. Seriously, no hours posted, no 'open' or flipped over 'closed' sign, no nothing.

We asked GPS what we should do and GPS said "Jerry's Coffee Shop" in that snooty accent of his.

GPS took us out to Simi Valley, which I only know from the OJ Simpson trial...or was it the Rodney King trial? Either way, it was something having to do with injustice. 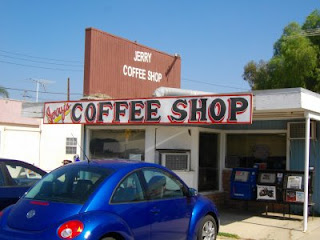 The moment we pulled up, I knew this place was something special. It looked like a dump, and dumps are either the worst or the best. 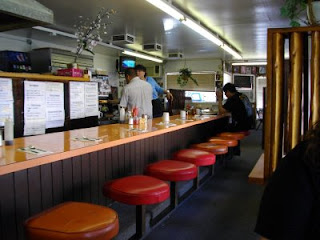 Jerry's is small, having maybe ten tables (with a few picnic tables outside). The carpet is stained and frayed, and the kitchen, which you can pretty easily see from the tables, is cluttered and messy.

The most interesting thing is... 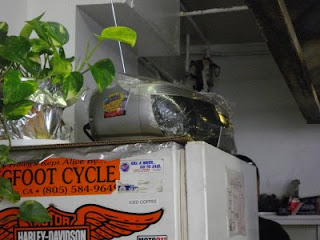 ...saran wrap on the radio and covering the outlets. 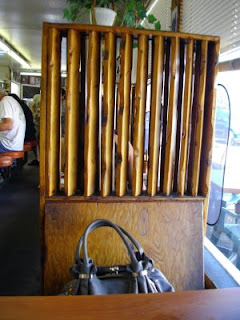 A lot of the booths have these really fascinating chairs. They look like they would have been a semester long project in a high school shop class or a side project by the Bauhaus...no, not that Bauhaus, this Bauhaus.
The coffee was only $1.65 and it tasted like $1.65 coffee. It was decent but a bit weak.

The menu was short and simple but had all the traditional favorites. 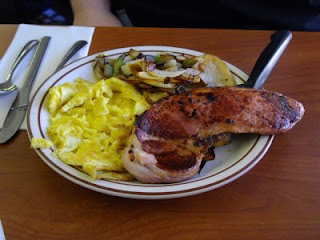 Antoinette ordered a simple breakfast of two eggs and a ham steak ($6.50). She liked the eggs. The ham steak, which looks obscenely phallic in that picture, was good but the some of the fat should have been trimmed off of it. The home fries were great. 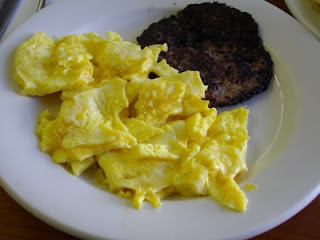 I ordered the pancake sandwich ($5.50). The eggs were a greasy, which I predicted they would be. Despite that, they were pretty good. The sausage patty was a nice change of pace. 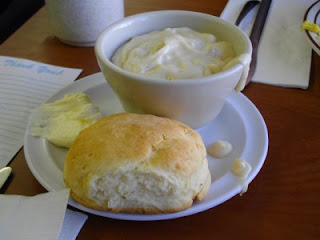 The biscuit was drier than I like and that was a whole lot of gravy for just one biscuit. Antoinette did not like the gravy at all, but I really liked it. It tasted--my hand to God--exactly like peppered beef jerky. 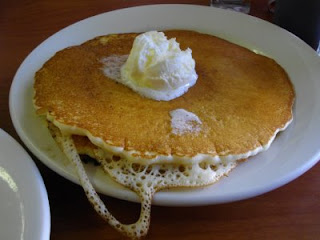 The pancake was close to perfection, like the best pancake you ever made at home on a Sunday morning. It was wonderfully moist and doughy.
After we finished eating, Antoinette got up to use the bathroom. I was probably spacing out thinking about lovely things or gas mileage or something, when I noticed someone staring at me. I shook out of it and realized it was the cook. He gave me the cook head nod that always means "Was the food okay?" I gave him a thumbs up. He smile and nodded and gave me a thumbs up back.

Jerry's was a great out of the way find. Because of its distant location, I can't imagine we'll ever be back though.
Food: Very good.
Service: Very nice.
Price: Very reasonable.
Pie: Very no pie.

Posted by Mike Tanner at 8:00 PM No comments: 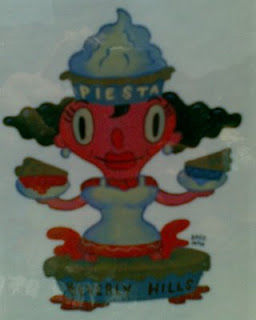 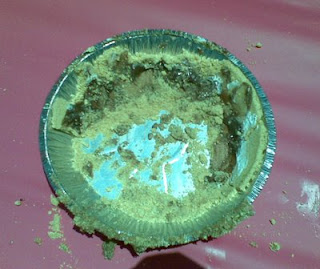 Posted by Mike Tanner at 1:02 PM No comments: