You will have trouble finding it. Your GPS will insist, such as it does, that you have arrived at your destination and it will do so using that condescending British accent you've been meaning to change but you can't remember how and the manual has gone missing. Your eyes will scan the street and find nothing. You’ll decide to just park and find it on foot. You’ll park in the nearby parking garage and then through the iron bars of the garage you will see it: 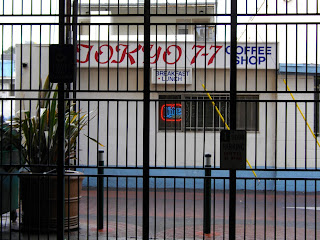 Tokyo 7-7 is an American Japanese Diner. Its alley location isn't so odd from the Japanese perspective of alleys being streets that cars don't drive down. Stores and restaurants are often found down alleyways. A few years ago, I went to Japan on vacation and most of my time was spent wandering down alleyways.

In America, where alleys are for hobos and murderers, it is an odd place for a restaurant. 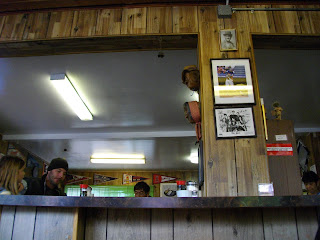 Inside, it’s like going to eat in your weird uncle’s den: wood paneling on the walls, 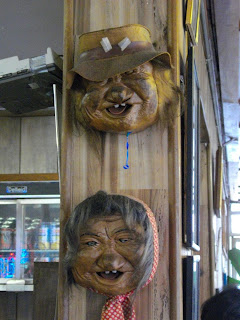 really odd…things…sticking out at you, 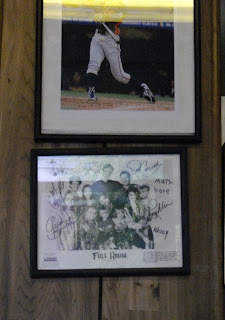 and like every weird uncle has—an autographed cast photo of Full House.

#1DC Antoinette, along with Diner Pal Paul (remember him?), took the opportunity on President’s Day to try out Tokyo 7-7. We rolled in at about a quarter to twelve, disappointed that we missed the super cheap breakfast specials which ended at eleven. 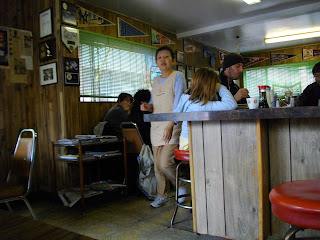 Our waitress went from sweet ol’ lady to exasperated in no time as after three check-ins with us we still had no idea what we wanted. The menu isn't expansive, but everything was so cheap that we were looking for the catch somewhere on the menu. “Do they charge for water? How can they afford this? Is salt extra?” 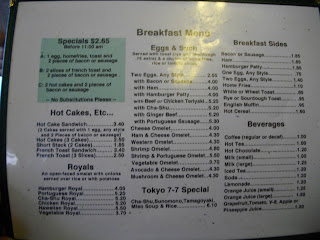 Sorry if the picture doesn't sell it, but there are no items in the double digits, and nothing above seven dollars.

Even though we missed the special super-cheap price for it, Paul ordered the French Toast breakfast. He liked the bacon and the french toast was pretty good. 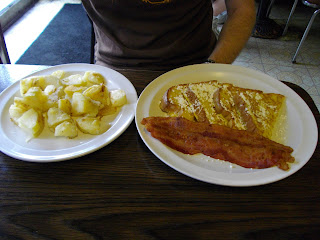 Antoinette got the Portuguese Sausage and Eggs. The sausage was spicy. The eggs were okay. The home fries were rather boring; they tasted like boiled potatoes that were just kissed by the griddle. 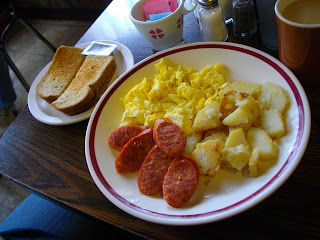 I went in a different direction. I went East...FAR EAST! (Get it?!) I got the Tokyo 7-7 Special. Basically a Japanese breakfast with tamagoyaki (thin layered omelette), cha-shu (pork), sunomono (pickled cucumber), rice and miso soup. Everything was enjoyable at least. There's something about the way the Japanese prepare eggs that kind of disgusts me with the texture (wet and slimy), but it tastes pretty good. Clearly the Japanese dish was the way to go. It was also the most expensive of the three, topping out at--OMG--6 dollars! 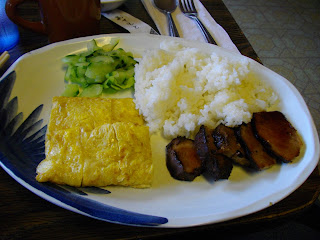 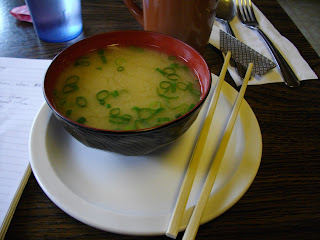 Now a word about the coffee at the Tokyo 7-7 Coffee Shop. It's bad. It might have been the worst coffee I've had at a non-Starbucks. It took a lot of sweetener to make it through. The waitress was pretty good about refills...which wasn't necessarily a good thing.

Diner Pal Paul, insists that, on price alone, he'd eat there everyday. For the three of us, our bill came in at about twenty dollars. I would definitely go back if I ever happened to be in Culver City wanting breakfast. It's a unique little hidey-hole of a place. I felt comfortable there, probably because it reminded me of Japan and... my weird uncle.

Food- Good
Service-Good. She did get visibly annoyed when we didn't know what we wanted right away.
Price- Dirt Cheap. Remember, cash only.
Pie- No pie.

I just learned that this place closed down last weekend. Special thanks to Diner Photog Charlie Chu for sending me the link. http://www.giantrobot.com/index.php/blogs/eric-post/tokyo_7-7/

Posted by Mike Tanner at 8:13 AM No comments:

Scroll down to the bottom for the new stuff.
Posted by Mike Tanner at 10:47 PM No comments:

You don't really expect to find a ol' fashioned American comfort food eating establishment in something called "Hong Kong Shopping Center," but that's exactly what you'll find in lovely West Covina (not to be confused with its rival, directionless Covina). 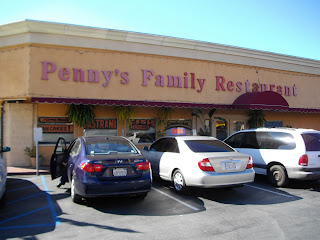 Penny's is a sweet little place surrounded by knock off 99cent stores, fast food Chinese restaurants, and video stores with signs in languages I cannot comprehend. On the Sunday morning that we went, Penny's was packed with what were clearly regulars. That, or the waitresses were Chatty Cathys with everyone. An elderly gentleman dressed like a cowboy with a penny stuck to his name tag and a belt-buckle made of nickels, coasted around the place filling up coffees. When we asked him a question regarding the food, he shrugged and said "Oh, sorry. I just pour the coffee." 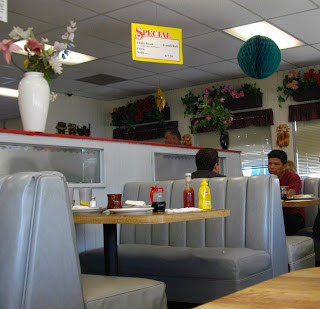 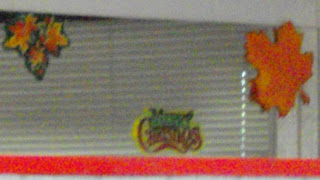 For all that activity buzzing around the place, you'd think someone would have noticed that we were in the beginning of February and they still had fall and Christmas decorations up. Maybe they just didn't care, like your great aunt who leaves up the Christmas tree all year because "Eh, I like it like that way" and "Oh, the bother."

While watching television the night before, I turned to #1DC Antoinette and said "Man, I want some pancakes!" So guess what I ordered? No swerve, I ordered the pancake breakfast with sausage, found on the menu as the "3 by 3 Special." 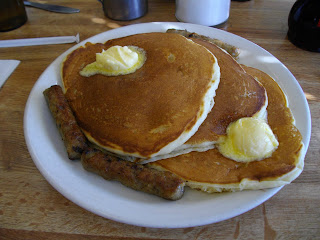 I'm going to confess that I like things doughy. I eat raw dough. Not just cookie dough, but rather all dough--and I like my pancakes doughy. Penny's delivered moist and soft pancakes to my belly. They also delivered a ton of butter, although I managed to scrape those two mounds off the moment after I took the picture. I'm sure my arteries look like the river of slime in Ghost Busters 2. I would have loved something more exotic, but alas they only had the standard maple pancake syrup.

The sausage was unremarkable. 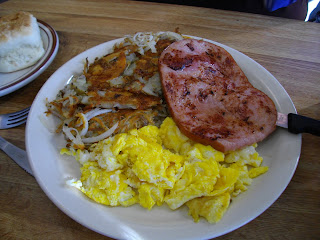 Antoinette managed to find something she has long desired: perfect eggs. I was skeptical at first when she made the pronouncement, but I tried a bite and they were, without a doubt, perfect eggs: not rubbery, not wet, tons of real egg flavor. They were THE perfect eggs.
The ham steak was flavorful, but needed a few extra minutes on the skillet to make it rival the perfection of the eggs. I found the home fries a little too greasy and Antoinette would have preferred more crispness. 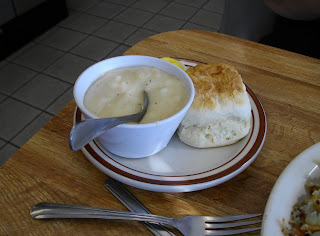 Instead of toast, she got the side of biscuits and gravy. The gravy tasted homemade with dashes of pepper while the biscuit was straight out of a package with dashes of disappointment.

Penny's did break the streak of family restaurants with crane machines, which could have been a disappointment, but hey had something arguably better: The Marvel Super Heroes fighting game from the late 90s. Juggernaut kicked my butt. Extra bonus--only a quarter! 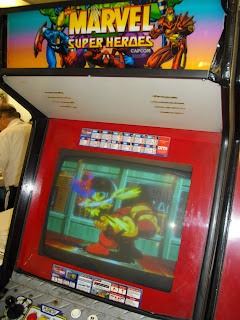 We enjoyed Penny's. For Antoinette, the perfect eggs kept it from being just okay. I loved my pancakes and an ol' cowboy pouring coffee just sold me completely.

Not a review, but an experience I should share.

Took a month off from updating...but not from eating.

Out for breakfast one Saturday morning, we cruised the neighborhood looking for something that might jump out at us. I suggested the Nickel Diner, but we decided it was a little expensive for our tastes that morning. I then suggested the Brite Spot. I hadn't been in a few months and never for breakfast. After that fateful morning, though, I may never, ever go again... 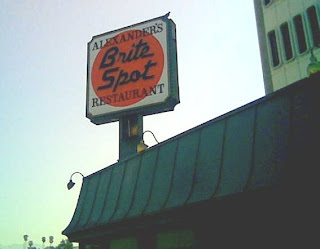 You will not see a lot of pictures in this post since it is not a review. I didn't go to the Brite Spot to review it. I went to get some breakfast, to strap on a feed bag and go to work. I was off the clock.
We walked inside, racing another couple to get a spot since we could see people piling up at the door. The Brite Spot is divided into two sections. On the right hand side I saw the waitress that I had had there a couple of times. She was clearing a table for us when I noticed my friend Dan (author of Banana) and his fiance sitting at a table on the left. We went over to say hello and they invited us to join them. They had just ordered so there shouldn't have been that much of a discrepancy between when their food and ours arrived.
The waitress in this section was a anemic blonde running at half speed--no--make that quarter speed. After a little under ten minutes, we got our menus and in a little under an additional ten minutes, we ordered. Our order was simple: oatmeal with banana for #1 DC and a breakfast burrito for me. We both got coffee as well and proceeded drink a lot of it. The refills came at a decent pace since another person entirely was handling that function. After about fifteen minutes, our friends got their food--at least most of it. Halfway through they realized they had never gotten their toast. After flagging down our waitress and reminding her of the toast, she paused for a few seconds and replied, "Oh, right." Then she moved on.
After about five minutes of our watching people who had been seated at the counter after us getting their food, our waitress brought the toast. "Umm, sorry.. it got all messed up. Better late than never."
Your waitress saying that about your food is just...wrong. It goes beyond terrible service.
We then reminded her about our food. " Oh, yeah.... it's coming." #1DC Antoinette suggested that we leave, but I don't walk out of places. I just don't. It's not something I am comfortable doing. I see it through.
At this point our friends were done eating. We talked for another ten or so minutes, waiting for the check to arrive. They finally had to flag her down again to get the check. She avoided eye contact with our side of the table. [Remember waiters: give the gift of eye contact.] Now, remember what our order was? Oatmeal with banana and a breakfast burrito. These take twenty minutes at home. We have now spent close to an hour at our table.
Our friends went up to pay and we said our goodbyes. After a moment, our food arrived. I took a bite of my burrito. Antoinette took a bite of her oatmeal. "It's cold," she replied. I jammed my finger into the wet mound of cereal and felt that it was, indeed, cold.
That was it. I had taken all I could take and I couldn't take any more. We got up and walked to the door. Our friends were still at the counter waiting to pay. As we walked past they asked what happened. "It's cold!" we announced and finished our walk out the door.
Dan said he watched the slow realization dawn on the face of the waitress when she looked over and saw an empty table.
This was such a bad experience that I did something I never do. I had done it only once before and that was at a Guatemalan restaurant that had stale chips and a wait staff who blatantly ignored us. I might go back to Brite Spot again someday; it's near where I live; it's near where I hang out; if I do decide to return, I will certainly refuse to sit in this waitress' section again.
All's well that ends well, however. We ended up having a delicious German brunch at the Red Lion Tavern on Glendale Blvd.