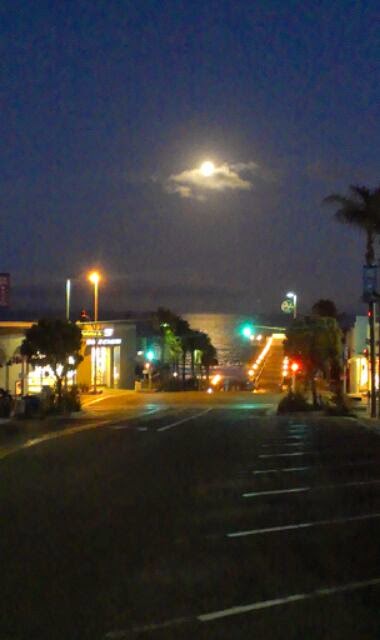 It has been a long time since I've been out and about before the sun. A trip to the airport to drop off #1Dinerwife Antoinette at 5 am put me on the far westside before sunrise. Originally, I thought I'd grab breakfast at Pann's but then discovered that they don't open until 7. Then I thought about Chips, but they don't open until 6. A quick search later I found The Kettle in Manhattan Beach. 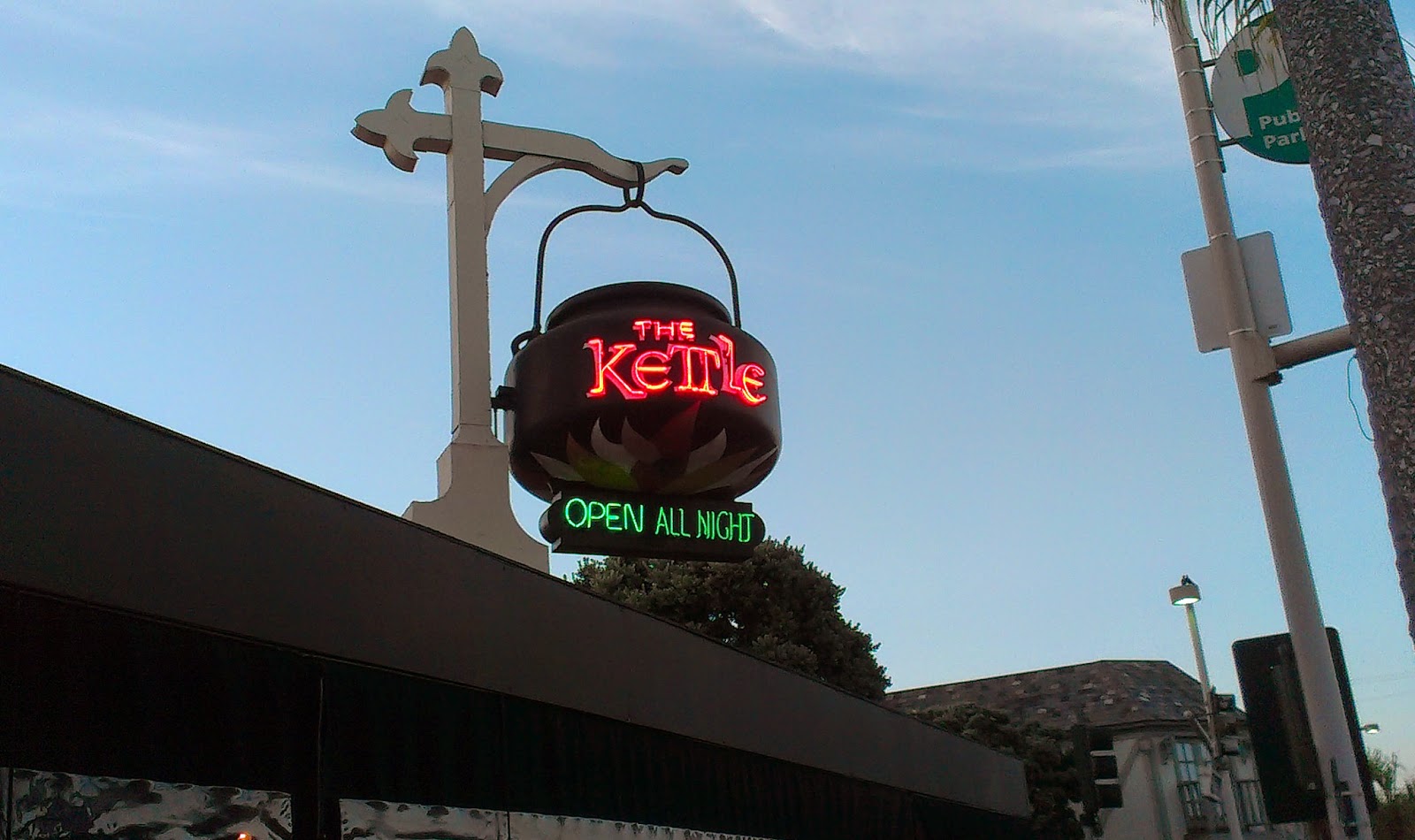 24 hour restaurants are a special breed. They are rare and have a unique gravitational pull during the night. Before fast food restaurants realized that drunks and stoners gotta eat, a 24 restaurant was really the only game in town.

Now at 5 am, when I came in, those "golden hours" of altered state eating are coming to an end. The bar crowd has stumbled away and the noble swing shift workers have wearily headed home, but it's a bit early even for the early risers. Who is out to eat at 5 am?

The World's Best Husband, that's who! Oh and a middle-aged couple who were eating hamburgers and three teenagers who were dressed for a day at the beach. I suppose they were prepping for a full day at the beach--sun up to sunset.

My waitress looked haggard, but I couldn't figure out if her shift was nearly ended or if she had just rolled out of bed. After needing more time with the menu, she disappeared for quite a bit. I then noticed her eating at the far end of the restaurant. Her shift was nearly done and she had no patience left. 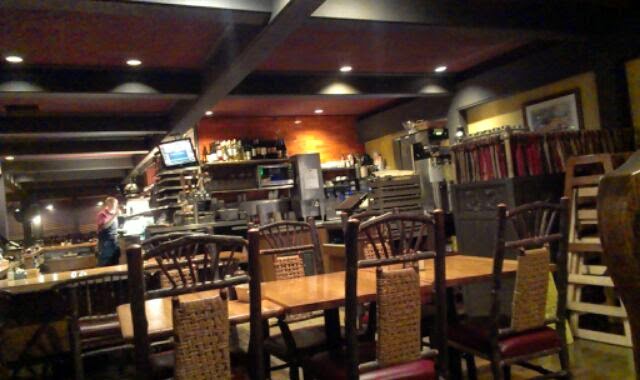 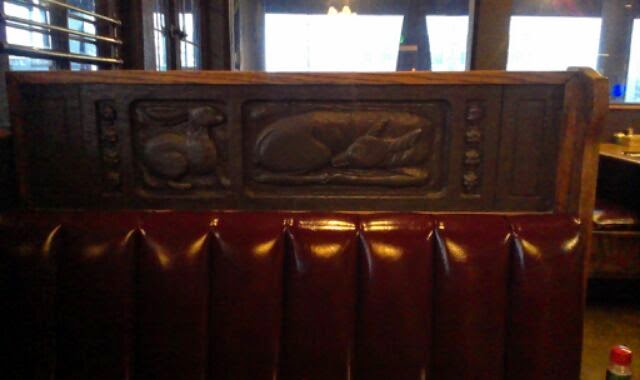 The Kettle's interior is woodsy, like a hunting lodge. For example, these European-style woodcuts of animals adorn all the booths.

I think that's an interesting choice seeing as it's on the beach. "Oh man, I'm sick of this beach. I want to escape to the forest!" Boom--go to the Kettle.

The menu is extensive--covering just about everything you can imagine for an all-purpose restaurant like this. It has a full page dedicated to their wine and beer selection. The breakfasts have a few interesting items. The chocolate chip ricotta pancakes for instance, as well as the bacon fried rice (made with coconut milk), but one item stood out to me--the OEUFS PAIN PERDU. I couldn't even pronounce it. When my waitress returned from scarfing down her dinner/breakfast, I had to point to it on the menu. 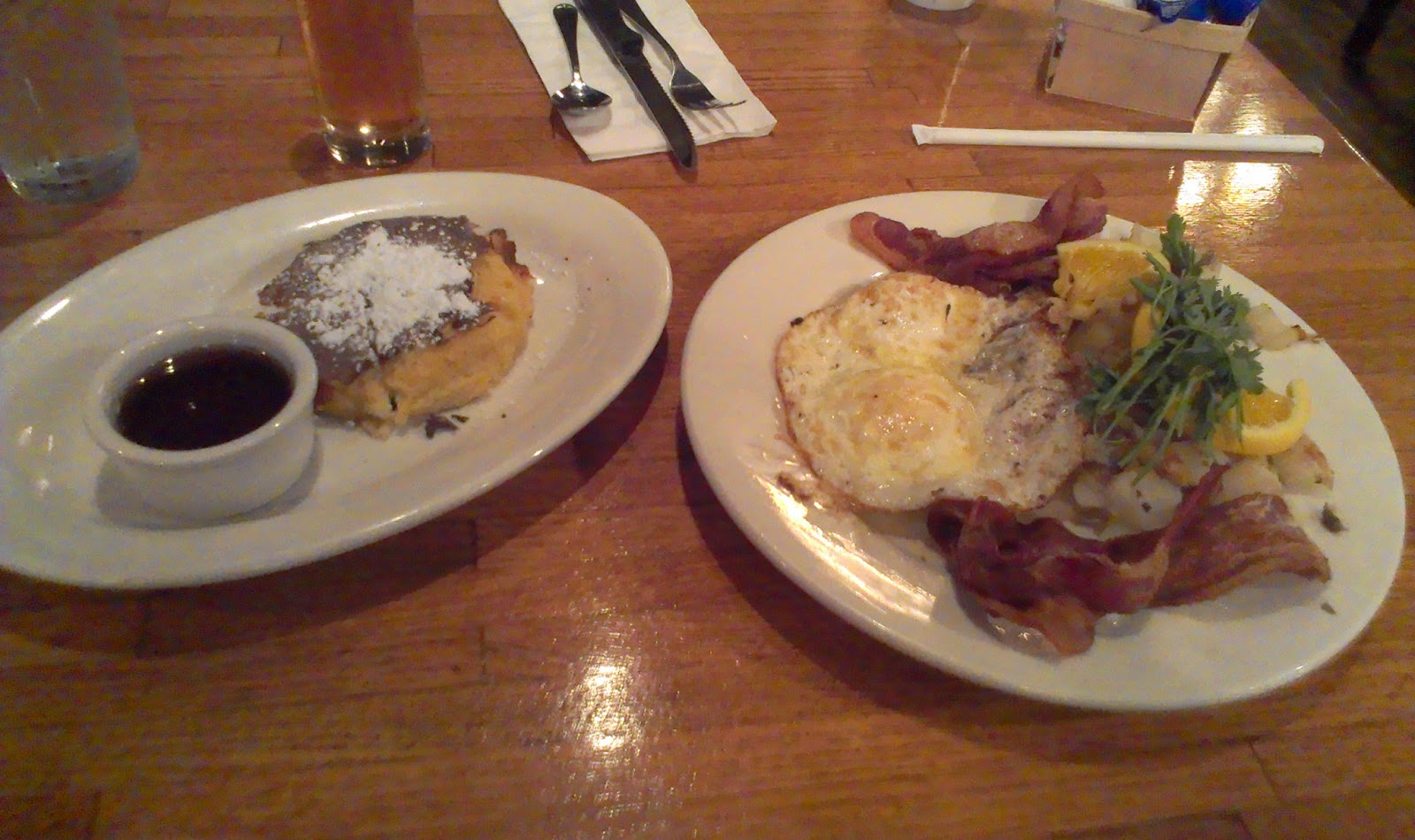 It's two eggs, bacon, and breakfast potatoes served with french toast stuffed with an orange marmalade cream cheese. What they don't tell you on the menu is that it's also served with a GIGANTIC bushel of parsley. Gigantic.

It was a good breakfast. The french toast was verrryyyy fancy. It had no crusts! The bacon was perfect and my eggs were as close to over-medium as I usually can get anywhere I go (over-medium is really hard guys, but that's how I like them). The only negative was that the breakfast potatoes were underdone.

Despite my lack-luster service and the kind of gross coffee (I got the first pour from a fresh pot and it was still not something I wanted to taste again), I enjoyed this place. The Kettle seems to be a safe bet, definitely when the moon is high and probably even when the sun is up.
Food: Good.Service: Decent - considering.Price: 12-16 for breakfast.Pie: Only cobbler.The Kettle
1138 Highland Ave
Manhattan Beach, CA 90266

Posted by Mike Tanner at 4:15 PM No comments: