We found it by accident. Number One Diner Companion Antoinette says she's probably driven past it a hundred times. While looking for a place to get dinner, we searched "new Rancho Cucamonga restaurants" and stumbled upon this place, Stevie Dee's Cafe. Formerly known as
Chuck's Diner, the name change is, I'm sure, how it came up as a result for "new" restaurants. 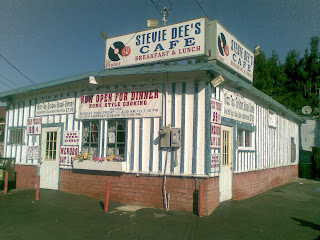 Stevie Dee's Cafe is a shack by the railroad tracks. It's a "50's Diner," which usually means enough kitsch to make you throw up your chotskies. As soon as you walk inside, ou know the place is going to be an experience; there are innumerable pictures of Elvis and Marilyn everywhere. Elvis as a cowboy, Elvis as a soldier, Elvis as your barber, Elvis as your mom. And Marilyn as...well, Marilyn. 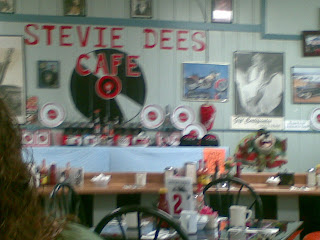 Like in most--scratch that--ALL 50's diners, there is a collection of Coca-Cola merchandise for sale. Why is this a trope of this style of diner? If anything, Pepsi is more of a icon from the 50s. 50's diners are all about an odd nostalgia for the pop culture of the time. Coke's never left the consciousness of the culture so it can't be dated to a specific time. Never has the Pepsi brand been so heavily pushed as it was in the 1950s. PepsiCo had Joan Crawford and a giant monkey-man hawking it, for Pete's sake! Why does Coca-Cola have such a lock down on nostalgia? 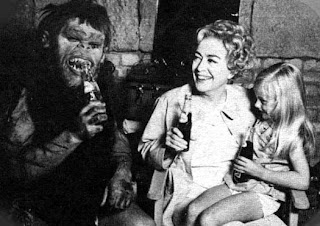 I'll be the first to say; I like that 50's kitsch. I went through my rockabilly phase and have the pomade to prove it. Growing up, my older sister went through a phase where we actually redecorated her bedroom to look like a 1950's malt shop--black and white tile and all. I have my James Dean, Elvis, Marilyn, Brando in "The Wild One", 'Chantilly Lace,' and 'Pink Carnation and a Pickup Truck' pedigree. I can also see how that kind of environment might provide an annoying dining experience. What saves Stevie Dee's Cafe is that this building looks and feels really...old. 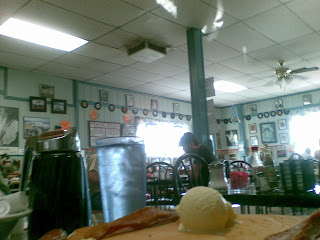 It's a folksy charm place, with a 'well-gosh-darn-it, we're going to make due with what we got attitude.' It's old without being decrepit. Its out of the way location (not being by an off ramp or a shopping center) makes me imagine it as a "locals only" establishment where a fella could just disappear into a new identity, forget all the wrong he's done, and start living right with God.

We sat down at our table and pulled our the menus from the little holder on the table. Glancing through them, we were surprised at how cheap everything was. The most expensive item on the menu was the T-bone and eggs, as $8.99. The cheapest, coffee at 99 cents. You don't get 99 cent coffee anywhere and it was better than I've had at most run of the mill joints.

Although our waitress recommended the french toast, I settled on an old fashioned pancake breakfast ($5.99) while Number One Diner Companion Antoinette went with the Breakfast Special ($3.99). 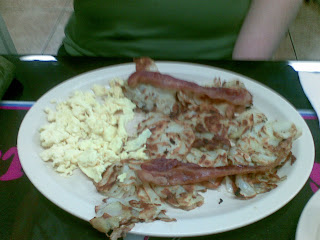 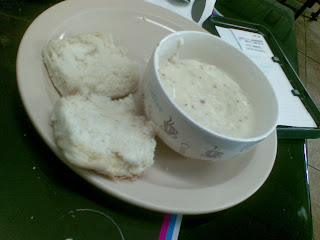 This is a spread of food, all for 4 bucks. The eggs, like mine, were dangerously close to 'too wet.' Antoinette thought they were good, and she's the discerning one. The home fries were thin cut slices of potato browned with just a hint of green pepper, and just greasy enough to be good. While the biscuit itself was unspectacular, the gravy was excellent: peppery and not too heavy, with large chunks of real sausage soaking in it. I wish the sausage they used in the gravy was what they served with the breakfast specials. 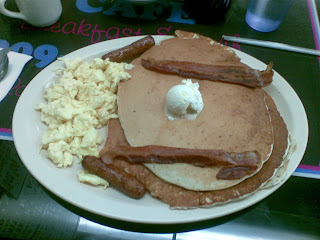 The whole ensemble was exactly what you'd expect. The pancakes were regular ol' restaurant pancakes. The eggs were eggs. The bacon was crispy like it should be. The breakfast links were fine, but I've finally come to terms with the sad reality; I have lost my taste for breakfast links. What are terrible state to be in for a diner reviewer! Alas, here I am.

The servers were all over us. I'd take two sips of my coffee and a guy would be there to refill it. Our waitress must have asked us a dozen times if we needed anything else and/or how we were doing. On our way out, we noticed a hand written sign by the door apologizing if the food took too long and for any other inconvenience, and that they phone orders were welcome, to speed up the lunchtime rush. Afterward, as I was looking at the Yelp review for Stevie Dee's, I noted that some had commented about the service being lack-luster. They were clearly trying to turn things around; our food arrived quickly, and the service was nothing less than solicitious.

You'll want to note that the parking lot is pretty small, and if the lot ever gets full, I have no idea where you could park nearby. Luckily, this is a hidden away place and I can't imagine it ever gets over-crowded.

On weekends they are only open until 3pm but during the week they stay open until 7:30pm for dinner.

Stevie Dee's Cafe was a nice find and I wholeheartedly recommend it.

Once again out in the wilds East of Los Angeles, I accidentally stumbled onto Joanne's Cafe. It was clearly an old building with a newer restaurant inside--the classic A-frame building with a vinyl banner for a sign is always a tell-tale sign. After doing a bit of research, I discovered that it was once a pie place...perhaps even a member of the House of Pies family of restaurants. 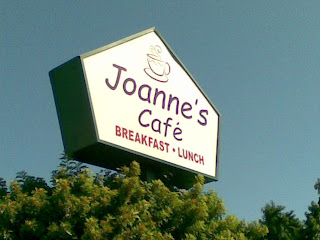 Inside, I was shocked at the odd pastels and spring time colors that decorated the interior. It was almost off-putting with its cheeriness. It reminded me of when I was a kid and my local McDonalds switched to a southwest deserty theme. I wanted the Hamburgular and Grimace, not taupe and turquoise paintings on the wall. Now I have to say, I am Grade-A *over* the shameless advertising that the Belgian Waffle receives at every breakfast joint nowadays. The Belgian waffle is the Miley Cyrus of breakfasts. Who pays for these ads? It's fascinating to me. Is it Belgium? Is it the NWA (National Waffle Assosciation)? Is there a National Waffle Association? If not, why not?

I was seated near the back of the restaurant by the emergency exit. An old couple waved good-bye to the front counter and exited through said emergency exit, which struck me as a little odd. A little while later, another elderly couple went out the same way. There didn't really seem to be a reason for it, as the front entrance and the emergency exit both emptied into the parking lot. My theory: old people don't give a ****.

So the first thing you are going to notice when you look at the menu are the prices. Seriously, these are probably the lowest menu prices that I've ever seen at a restaurant where not only is there a waitress but an actual roof on the building. The average meal price is five dollars, and there is nothing over ten dollars.

I ordered about as standard a breakfast as I could imagine: hash browns, eggs, and sausage breakfast. For my choice of bread, I ordered the zucchini bread. Not a normal offering for a breakfast bread, but if they have that as a choice, it must be something they are proud of. 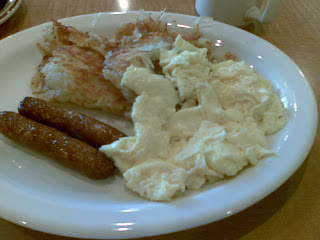 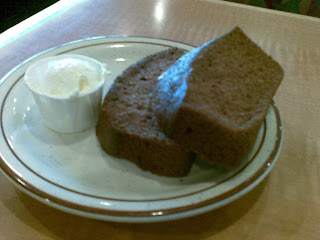 My food came out super fast. Like scary fast. After taking my first bite, it became clear that it was not efficiency that brought my food to me. My eggs were undercooked and my hash browns were mushy. The zucchini bread was soft and warm and quite good. However, I would never say "You gotta try the zucchini bread." If you ordered it, I'd say "Oh yeah, it's good." It just didn't stand out as wonderful. Halfway through my meal, my stomach started to rebel. I couldn't finish.

On my way out, I had to stop at the fish tank. Joanne's Cafe is the kind of place you go knowing it won't be anything more than "good enough," and at those prices I can see why people would be willing to go, despite the low-quality.