Dinerwood on the Road: Night and Day Cafe, San Diego

On our first night of our yearly trip to San Diego, we headed over to Coronado, the posh island community nestled off the coast of downtown. The Night and Day Cafe is a 24-hour broom closet of a place and provided one of those most bizarre eating excursions I've had in awhile. 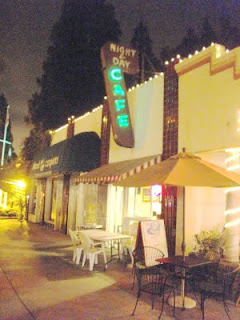 Night and Day Cafe is tiny--maybe fifteen feet wide and no more than 30 feet long. It consists of a modest narrow counter and a cook station with some nominal storage in a back room. When we arrived, the counter was nearly full and we took the last two seats right at the front. 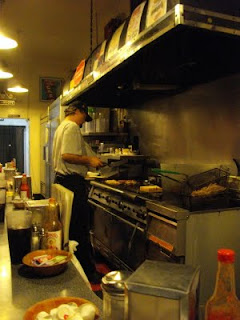 The walls are decorated with some choice artwork and photography. There is also a very modern jukebox mounted on the wall, which I couldn't get a good picture of as I would have had to crawl over the counter and stand on the griddle. Yes, that last picture is a guy with a fish sticking out of the bottom of his shorts and the second to last picture does say "Belgium Waffle." 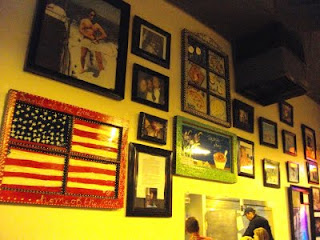 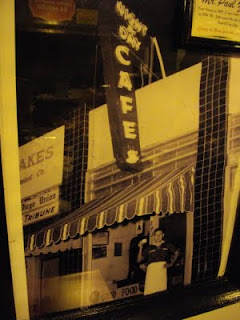 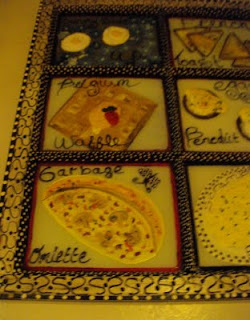 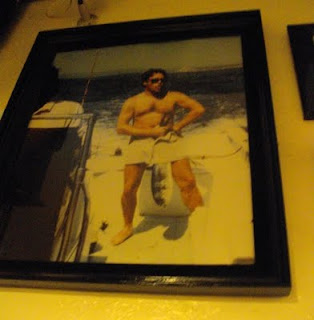 The cook who was working not only looked but also acted a lot like the character "Cheddar Bob" from Eminem's "8 Mile." If you've seen the movie you'll know what this means. If you haven't seen the movie, well what do you imagine a character named Cheddar Bob is like?

#1DC Antoinette and I were both shocked at the prices. There was very little under 8 dollars and if you wanted something extra, like fries, it tipped the modestly proportioned (we could see what the other patrons were eating) meals over into the 12 or 13 dollar range. Clearly, Night and Day Cafe had been corrupted by the affluence of the area. A place like this couldn't have started out way back when with these premium prices.

I wanted a patty melt and Antoinette had settled on the salad when the late night cooked wandered in to relieve "Bob" and told us that we had the wrong menu. He then handed us the "Graveyard Menu." Graveyard because you'll DIE looking at these prices! Seriously, their late night menu cuts several of their cheaper items (like the chili) and ups the price on others by nearly two dollars. For instance the tuna melt is normally $7.75, after 9pm it raises to $9.50.

Thrown for a loop, Antoinette had to rethink her order. To his credit, the late-night cook did offer to basically make anything for her and run over to the Vons across the street to get any ingredient he didn't have on hand. She ordered a grilled cheese (which was on menu) with bacon and tomato (which was not). I stayed with my patty melt (which had a small price jump on the graveyard menu). We decided to split the fries. We then again ordered a soda and two waters, which eventually the new cook did bring us.

By this time, some space at the counter had opened up and a trio walked in and sat next to us: two bros and a girl who was riffing off Marilyn Monroe, down to her peroxide hair and white halter dress. Our new cook was seriously taken by her. Even though she was clearly spoken-for by one of the dudes next to her (it was unclear which one), the cook proceeded to do his best to seduce and delight her. He put some Chuck Mangione on the juke box so the sweet jazz trumpet sounds would enthrall her. When she ordered fries, he offered and then went on to make her fresh french fries, cutting new potatoes just for her.
After a nominal amount of time our food came up. 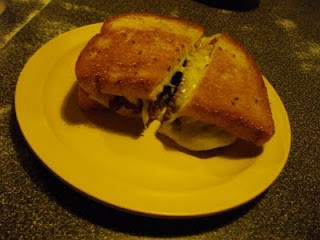 My patty melt was very good. It consisted of two patties and lots of cheese and it was grilled just right to make it all come together nicely. It wasn't the best patty melt I've ever had and it certainly wasn't worth the late night price. 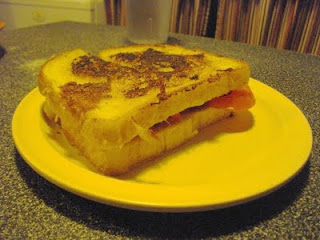 Antoinette's grilled cheese was sublime in its simplicity. It's a great combo. The tomato helps cut the grease from the bacon and cheese. They also used garlic butter to grill the bread, which was a nice complement. 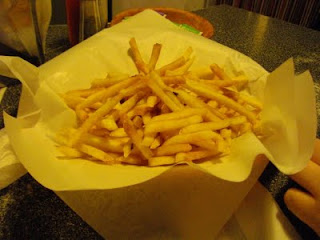 He delivered our second-rate not freshly cut fries. I asked our cook/waiter for ketchup. He said, "sure," and went to the back to get a bottle. He then delivered it to the counter: 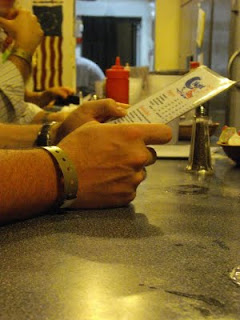 Oh, not to us. He put it in front of Marilyn Monroe, whose fries were still crisping in the fryer. He very rarely took his eyes off of her. It was especially bizarre because everyone on our side of the counter knew and understood it was weird and all we could do was awkwardly laugh at how awkward it was.
The fries weren't that good anyway. He totally wasn't getting up her skirt using those.
Night and Day Cafe was really bizarre. Good, but not good enough for the price. When we finished and paid, we waved goodnight to the cook. He didn't notice. I can't imagine we'll ever go back.
Food: Good.
Service: Likes blondes.
Price: $8-$13
Pie: NONE. 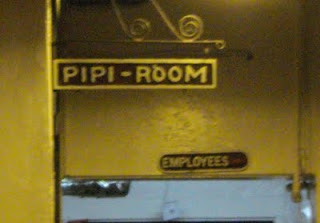 Posted by Mike Tanner at 7:02 AM No comments: 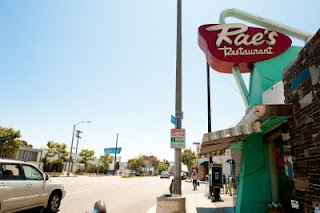 It had been quite awhile since I had been to the west side. Charlie lives there and recommended Rae's as a good example of an unheralded breakfast joint on that side of town. He was available to shoot pictures, so off we went.

We rolled in for a late Sunday lunch and I was surprised that it wasn't very crowded--not a ghost town by any means, but not packed. It turns out that the restaurant is deceptively large. Its main counter and booth space is augmented by an annex full of tables in the back. It was also decidedly non-douchey with a healthy mix of hipsters, locals and families. The douchey quotient is kept down by the proximity of places like Snug Harbor and Bread & Porridge, which act as a magnet for those types (Not saying there's anything inherently douchey with those places; they just happen to be more popular.) 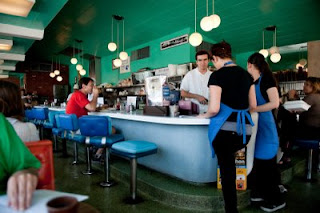 Rae's was clearly an older place (est. 1958 according to their menu) and luckily hadn't a seen a renovation in quite some time. The colors change from a green and blue to a decaf shade of orange at the booths. Architecturally, the interior is all hard angles with the globe light fixtures and counter edges being the only exceptions. We sat in front of the picture window by the door. The large window let soft afternoon light just pour in, which gave everything a nice glow. 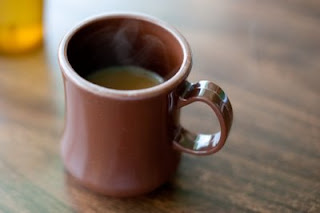 First off, I ordered a coffee, which was incredibly good--nice and strong without any bitterness. I found it very amusing that they served it in plastic mugs made to look like classic ceramic coffee cups.

The menu is small, comprising only one page. It covers the staples well and is peppered with interesting items and odd section placement. Under "Sandwich Specialties" it lists sundaes and malts and ice cream topping for sodas. I was sorely tempted by something called the "Denver Sandwich" which consists of two eggs, ham and pineapple. Now eggs and ham go together and ham and pineapple go together. Eggs and pineapple though? Why call it a Denver sandwich? Apparently it's a thing, although the pineapple appears to be an exclusive to Rae's thing.

Ultimately I went with the other most intriguing option: the bacon topped waffle.
Charlie ordered the Chorizo. 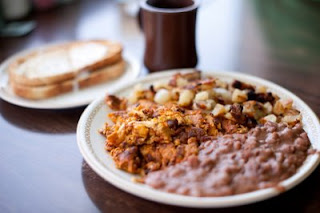 The chorizo had a mild spiciness to it, just enough to give it a tiny kick. 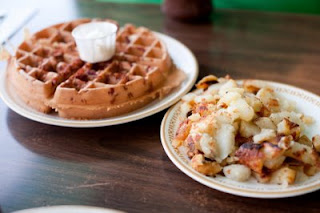 I expected to just find bacon bits sprinkled on top of the waffle, but what came was even better. The bacon had been added to the batter and cooked into the waffle itself. The syrup was nothing special but overall the combination was very good. My potatoes were adequate.

Something we both noticed about the food is that it is perfect "drunk food." It looks decent when on your plate in the daylight, but would look amazing if you were really drunk and trying to sober up. The slight sheen of grease would look delightful reflecting in the streetlights from outside. 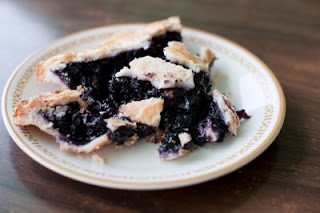 At the end of our meal I decided to indulge with the blueberry pie. The edges of the slice were dry and sticky, which happens to fruit pies when they have been sitting out for awhile. Once I got closer to the center, it was much better.

Rae's was an enjoyable place. It had a nice atmosphere and decent food, but its biggest asset may be the price. For two breakfasts, coffee, orange juice and a slice of pie, our bill came to only $19.00. I look forward to going back there and enjoying more of that great coffee and maybe trying that Denver sandwich. 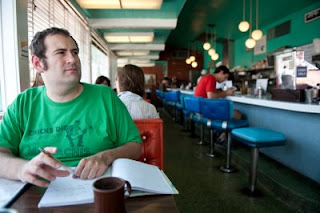