I recently had the good fortune of going to Australia to indulge in my other hobby. As soon as I found out that I was going, I looked into possible places I could review. Being on someone else's schedule and without a vehicle of my own meant I was going to be limited to places near where we would be staying. I made a list of places that given the opportunity I could make a try for. I wasn't having much luck until halfway through the trip an opportunity finally arose in Melbourne. Early one morning and I was able to strike out on my own.

Before we get into the review, I should mention some of the related culture shock I experienced while on this trip. Like Vincent Vega said in "Pulp Fiction," "it's the little differences." Free internet access is nearly non-existent. List of places with reliable free wi-fi: McDonalds, Starbucks. End of list!
Breakfast is referred to as "brekkie." All coffee there is espresso--ALL OF IT.

That last one is a big one. I'm a simple man, I like butter on my toast and coffee in my mouth--regular filtered coffee. You order a regular coffee there and they will bring some watery instant stuff from a packet. They have their espresso drinks dialed tight (I have come to enjoy a 'flat white' espresso when the opportunity presents itself), but regular coffee not so much. Refills were not free and in an already expensive country, my habit was severely denting my per diem. I had taken to carrying a travel mug with me so I could refill with the instant coffee packets found in my hotel rooms. 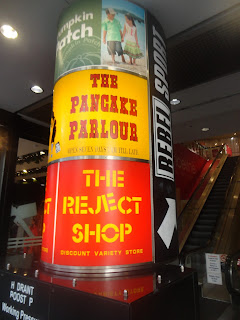 My destination that morning was The Pancake Parlour. I should say, it is a chain in Australia. I think it was okay to break my "no chain" policy while on another continent. This location, in downtown Melbourne, was actually on the lower level of a shopping complex. It was located across from The Reject Shop, which the name alone made me so want to shop there after my "brekkie." Turns out that The Reject Shop is just the Aussie version of Big Lots. Honesty, pass it on. 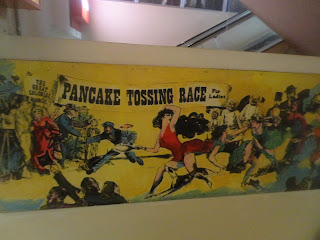 Traveling down the escalator I was greeted by this wonderful Victorian-esque mural. I don't know what a "pancake tossing race" is but I'm pretty it was the sexiest thing since exposed ankles at the beach. 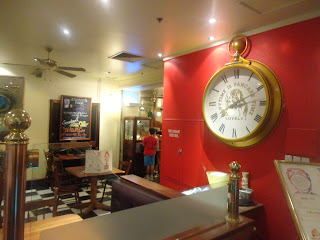 This photo doesn't sell it as much as I'd like but The Pancake Parlour is like a bizarre mash-up of an IHOP and an old-school Shakey's Pizza.

Checking out the menu I was a little surprised that so much of the focus was on pancakes. I know that sounds weird, but I expected a scatter-shot menu--"family restaurant" style--an Outback Jack-s Of All Trades, if you will (yes, I did just make that joke). This was all about pancakes, both sweet and savory and then a few token salads and egg breakfasts.

Within seconds of scanning the menu my jaw dropped and I heard a hosanna from the angels. 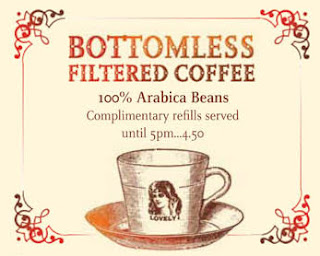 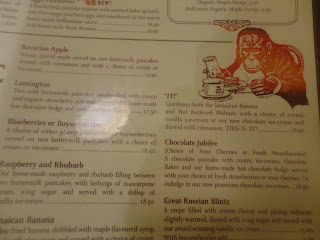 Bottomless. Filtered. Coffee. Hell. Yeah. I would have stayed all day if I could.

Everything is better with a monkey on it.

I couldn't decide between the Jamaican Banana or the Hot Buttered Walnut pancakes. That's when I saw it. 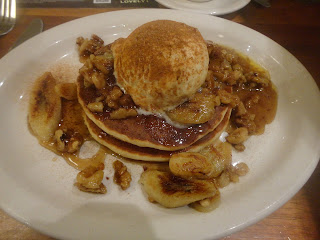 This was "It." And "It" was good. It's the banana and the walnut together. I rarely go for this kind of dessert for breakfast since it can be overwhelming, but I was on a vacation of sorts. I was going to live a little. This combination worked really well. It was sweet but not too sweet. The bananas still tasted like bananas and the walnuts complimented them well. I opted for whipped cream over ice cream, because being on vacation is one thing, going whole hog is something else. 8am definitely sounded like too early for ice cream. Maybe I should have just gone for it, I probably wasn't thinking straight. It had been so long since I had had... 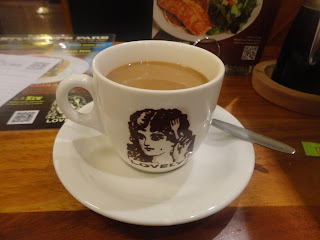 I can't really evaluate if this was good or not...but it was hot and familiar and it definitely was good at the time. A tiny taste of home that served its purpose.

In fact, as I was finishing up and the waitress came by to ask if there was anything else she could do for me, I asked her if she could refill my coffee one last time.  When she came back with the pot, I asked if she could just pour it directly into my travel mug. She seemed confused but she did oblige.

Food: Good
Price $18-22--yes expensive, but you don't tip in Australia so it balances out a bit.
Service: Good.
Pie: No pie.

Conrads in Pasadena "We Serve to Serve Again" 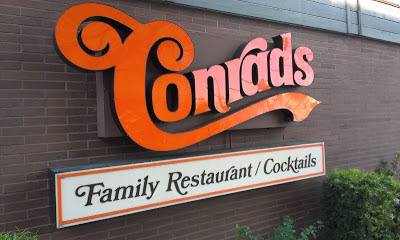 Conrads is one of those places that just exists. No one ever talks about it, but everyone knows about it and just kind of shrugs. You maybe get a "Oh, I think my grandparents took me there once."
There are two locations, one in Glendale and one in Pasadena. The Pasadena location we have driven by dozens of time, but it just vibed too strongly as a chain restaurant to make me really want to experience it. Recently, we finally gave in to our curiosity. 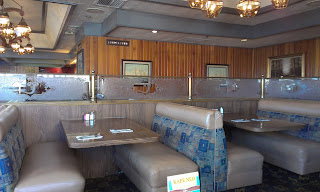 It really does look like a "once with my grandparents" place. Those mauve seat cushions really POP, don't they? I want to believe that at one point the burnt orange of the lettering outside was found inside. In my imagination the wood grain walls and that groovy orange would have been been magical. Now here in the real world, the main dining room looks like the lobby of a Sheraton in North Dakota. 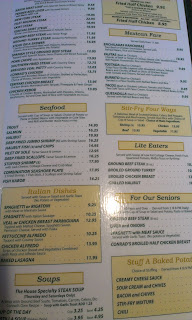 ﻿
'Family restaurants' cater to a nightmarish family that must be impossible to please or incredibly large. Conrads is a family restaurant and the menu casts a wide net. There is something for everyone and then some.
Breakfasts have become a bit of struggle for #1DinerWife and I since we are pursuing something close to a low-carb lifestyle. A full breakfast out anywhere is nearly half-carbohydrates. We struggle to find satisfying workarounds. 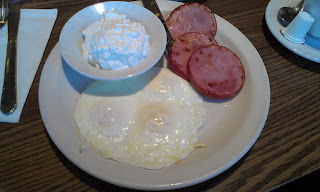 Lately my breakfast of choice has been Canadian Bacon and Eggs. It's not just the best pizza topping, it is also a great way to mix up your "ham and egg" routine. What is the difference between ham and Canadian bacon? Nothing really when it comes down to it. Different parts of the pig but they pretty much taste the same. Where I am finding the benefit in getting the Canadian bacon is that it is the perfect size for an English muffin. Now how does this jibe with our new low-carb lifestyle. Well, it's more of a 'suggestion' then a lifestyle sometimes. I have gotten quite apt at balancing one half of the muffin with a slice of Canadian bacon and part of my eggs on top. In place of the potatoes, I subbed in some cottage cheese. 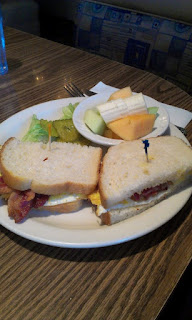 Remember, I said low-carb "suggestion." #1DinerWife Antoinette ordered the fried egg sandwich with bacon. This fried egg sandwich was pretty simple, slightly too simple. The bread was buttered lightly but not toasted. It was just bread, a well-fried egg and some bacon and it was good. She opted for the side of fruit which was surprisingly decent.

Conrads is a perfectly adequate place. Truth be told quality-wise, its not any better then a Denny's or Carrows. Maybe even a little below those chains if it came right down to it. If you've read this blog at all, you know I am a big proponent of local business and local restaurants, which is why I'd rather come here for a B- breakfast over Carrows and get only a B+ one.

"Why go there at all?" you might ask since there are places near there where you can get a solid A to A+ meal. It's more than just the quality of the food, it's the quality of the experience. Conrads' had attentive and friendly service. The awful interior decorating of the main dining room aside, it feels nice in there. Also, the lounge is a lot more vintage classy than the main room, and I definitely recommend eating in there if you have the chance. There's no picture because, well, we were there around noon and the lounge already had some regulars at the bar. I kind of think if you are at a bar at that hour, you probably don't want your picture taken. 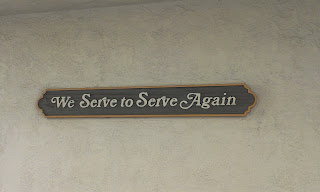