Spare some change for the Nickel Diner 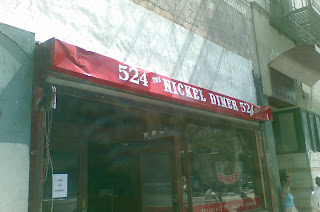 I recieved a hot tip about a new diner opening up in downtown. Okay, it wasn't a real "hot tip." It was diner pal Paul forwarding me an article from an LA website about the opening. I knew that I had to go on the first day because how often do you get to go to a place on it's opening day? I've never experienced it, but I can imagine there's excitement, maybe some headaches and potential disappointment, but also potential amazement. It's a lot like the first time you have sex...with another person...or with yourself for that matter.


The Nickel Diner opened for its first shift on August 27th in one of those areas of downtown that's getting gentrified, but only jussssst barely starting the process. Imagine the area around venerable Los Angeles cafeteria, Clifton's, without the glitz of the jewelry district but with all the goodness of the homeless.

Joining me this time were #1 Diner Companion Antoinette and #1 Coworker Eveleen. Technically speaking, I crashed their lunch plans and convinced them to go to The Nickel. We lucked into parking right in front. A Meth head perched near the entrance provided us some parking advice when we encountered a broken parking meter,
"Don't worry, they don't bother checking." It was almost like valet!


The street locals did seem cautiously curious of this new eatery in their midst. Many of them would stop and gaze at the delicious looking baked goods in the window. None, though, even seemed to consider going in. 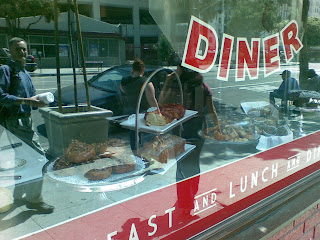 Arriving there at about 2 pm, I was pleased to see a healthy crowd still eating. Unless the waitstaff were total d-bags and the cooks put AIDS infected needles in the vegan tapioca, I want a place like this to succeed. I love diners of all stripes, even the nouveau diners, which The Nickel definitely embodies.

So the first of two headaches hit us pretty quickly. The menu implores you (with its placement and catchy name) to order the S'mac and Cheese (spicy with three cheeses, topped with tomato and bread crumbs). The waitress confirmed that the name was meant as a joke based on the neighborhood. The gals wanted to go splitsies on it and then the waitress had to say "Yeaaaa... we actually don't have that today." 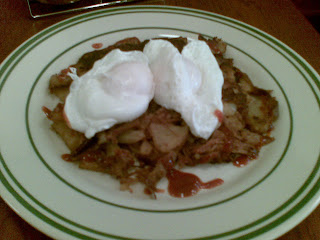 The BBQ pork hash and eggs was probably the most old-school diner thing I could get on the menu by the early afternoon. (Pancakes stop being served at 11). It was a good choice: familiar, but with enough of a twist with the BBQ sauce and the seasonings that I felt like I was getting something brand new. I was a little disappointed with the portion. It was a reasonable portion. I am not going to lie. I like to have to make a choice about whether or not to clean my plate. I was left hungry. Luckily, I had some other delectable things to graze on.

The girls did go splitsies on some items. 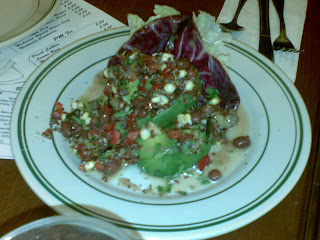 The stuffed avocado couldn't be any more frou frou. It had quinoa in it. *I* only know what quinoa is because I bought an "Archer Farms" box dinner version of it from Target. It's like cous cous. I still don't have any idea how to say it. The avocado was not something I'd ever order on my own, but it was exceptionally good. I'm glad the gals got it: flavorful combination of red peppers, black beans, corn, and quinoa made this a hearty salad option. 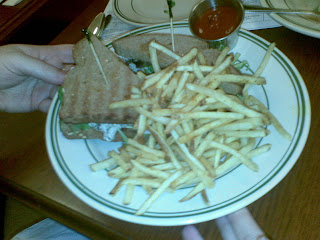 They also got the chicken salad sandwich on wheat. I love chicken salad and although this was good, it didn't seem up the level of culinary detail I was begining to expect as part of the Nickel Diner's plan. I imagine it will go through some refinement.

The french fries were beyond belief. Thin cut, but not overly crispy, with a great flavored salt. I am going to make a "top 10 fries of all time" list, just so I can put these on it.

We were treated to a lovely display of the desserts available and even got to sample the maple glazed donut with bacon pieces (real bacon not the stuff you put on salads) sprinkled on top. Bacon and maple syrup are two things that need to be combined much more often in this world.

At this point, the second headache appeared: the credit card machine was not working and it was cash only. After trying to pool our cash and realizing we'd come up short, I jaunted out into the world to find an ATM. I lucked into finding one two blocks away in a liquor store where weird old men watched me suspiciously.

One week later, the three of us returned to see how things were going. The good news is that they seemed to be going well. We had the same waitress and asked about how business had been. She said steady and that they had gotten slammed over the weekend. I'm glad they are doing brisk business.

This time I ordered the polenta with chicken apple sausage and maple syrup. 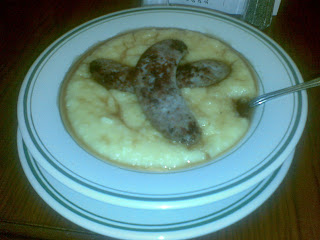 I wasn't really sure what to expect. I had only ever had fried polenta before. This blew me away. Easily my favorite thing so far at the Nickel, I think I could eat this for breakfast at least twice a week. 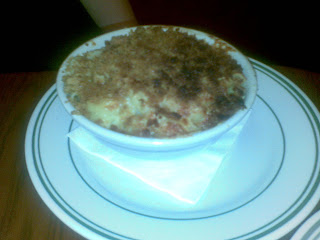 The girls were finally able to get the S'mac and Cheese. Antoinette didn't feel like the three cheeses blended very well and just made a strange flavor--not necessarily a good or even an interesting one. The amount of bread crumb crust was a bit much. 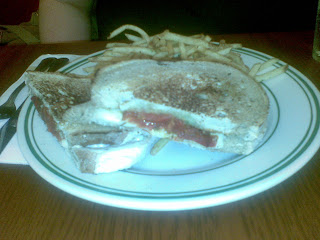 Now the grilled cheese sandwich won the blue ribbon from the gals: "Phenom!" Roasted tomato and mozarella, perfectly grilled. I will note they also have another grilled cheese option with cheddar, bacon and tomato.

Still having some room for a dessert, we decided to peruse the dessert tray. Typically, I was inclined to get the delicious looking meringue, but the Berry White Cake could not be ignored. 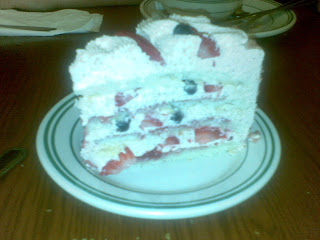 Loyal readers will know that I am a hardcore pie man, but even I will admit that there are cakes that look like works of sugar art make kissy faces at your eyes. More often than not, they fail to actually do the same to your tastebuds. This one actually delivers on the visual promise with a deep and long perfect blend of everything from the amount of fruit, the thickness of the frosting to the amount of actual cake.

I'm very glad to have a diner near my day job so I can have easy access to my favorite style of food. An extra bonus is that this place is spectacularly good.

The only bummer: they still hadn't fixed the credit card machine.