Sure, it looked a little sketchy on the outside. The building could have used a new paint job. The parking lot was empty except for two cars. The place had two names--one on the sign and another on the building. Was it Stewart's Coffee Shop or was it the Busy Apron? Charlie and I approached the building, one of us nervous and the other quietly optimistic. 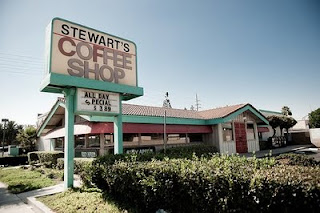 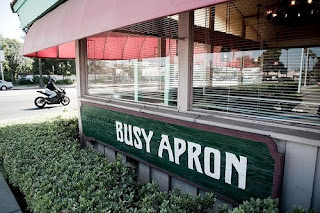 How did we end up here? Well, let me just say, the Original Pancake House's website said they were open until 3pm. Charlie and I had just slogged through an hour of Saturday afternoon I-5 traffic to get there in time. I even had a coupon! We arrived with what we thought was an hour to spare, only to be informed by a departing waitress that they actually close at 2pm on Saturdays.

Dim sum ain't a diner--well, in some ways it is, but we'll get to that another time.

I had noted Stewart's Coffee Shop as we drove past it. It's only about 2 blocks from the Original Pancake House, so we headed back there. I sensed adventure. I think Charlie sensed the possibility of food poisoning. He had recently been acquainted with it, and had no desire to be reintroduced.
The moment I walked through the tall double red doors that are usually a hallmark of neighborhood Chinese food restaurants, I was in Stewart's thrall.

You know how much I love globe light fixtures? I would have a torrid affair on globe light fixtures with Moorish black wrought iron light fixtures. This passion comes from a lamp that hung in our rec room growing up--a lamp I still have. It resides in a closet right now because #1DC Antoinette doesn't think it goes with our living room decor. (Editor's note: this statement is entirely bullshit. I have suggested several times that we hang up that lamp in the aforementioned living room.) Stewart's was decorated with a series of chandeliers and hanging lamps in that style. 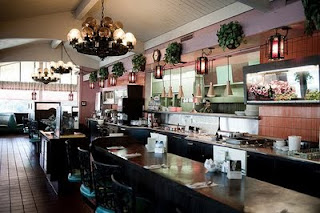 We stood in the entrance for several minutes without anyone saying anything to us. We saw a solitary waitress at the far side of the restaurant talking earnestly on the phone. Charlie once again suggested Dim Sum. He was not feeling this place. I was resolute.

There were only two occupied tables inside the whole restaurant. One of them happened to be right by the entrance. As we waited to be greeted or acknowledged, I asked the people at the nearby table how the food was. The woman gave me the "ok" hand gesture, which doesn't really mean just "ok," it usually means "good." The man piped up with a comment of "we eat here almost every day." I imagine that this place thrives on regulars, people probably greeted by name when they walk in. Maybe that's why we hadn't been approached yet; we were strangers.

After another minute or so, the waitress did put the phone down long enough to seat us. We took a booth by the window and began to really take in the surroundings, which did not make Charlie any less apprehensive. All the bad motel art on the wall was off-kilter. All of it. Like someone had purposefully gone to each one and nudged it a bit. The carpet was filthy. At corners and under ledges, we could see patches of what the carpet had once looked like. As much as the outside needed a sprucing up of the paint, the interior was in desperate need of even more care. 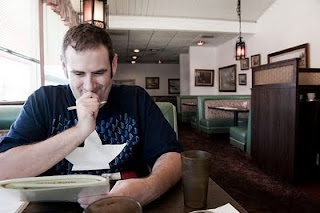 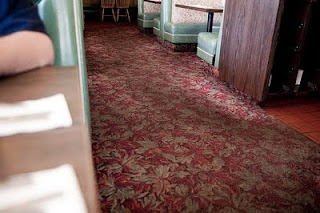 The waitress handed us menus that read "Busy Apron" instead of "Stewart's Coffee Shop." Now, had the menu's never been updated? Or had the sign never been changed? Looking at prices I was going with "never been updated." The prices were insanely low--nothing over $8 and the average price for an entree was $6.

Our waitress then disappeared to the other side of the restaurant. An older man came out of the kitchen and picked up the phone. He immediately began talking, so it was clearly the same phone call. We assumed he was the cook and our waitress would not return to take our order until he returned to the kitchen. Rather make us wait now than wait after we had put our order in. We settled in for the long haul.

It might be worth mentioning at this point that the entire staff of the restaurant was Asian, which will make some of the menu items more understandable.
The menu was full of interesting quirks that reminded me a email spam subject lines. "Eggs to Eat and Remember." I was most curious about the "STE style eggs." When I asked the waitress what it meant she seemed embarrassed and said "It's just a name." Charlie and I both needed more time to decide.
Then another man, who was actually dressed like a cook, complete with funny chef hat, came out for a moment, saw his shadow, and returned to the kitchen.
Our waitress soon came back to take our order. Charlie, now apparently free from fear, ordered the corned beef hash and eggs. I ordered the "Eggs a la Heavy." It promised to be a "casserole" of eggs, ham, tomato and green peppers. I also ordered a side of biscuits and gravy.

Our attention was attracted by a building across the street. We were unsure if it was a church or an old folks home; it could pass for either. On the lawn, a sign read "Psychic Fair and shopping" and tents and tables were set up. I remembered that I had just found out an ex-girlfriend of mine had become a pet psychic.

"Was there any indication of this ability while you were together?" Charlie asked.
I took a moment to answer, "Maybe."

I always wonder how badly my presence has effected the lives of my exes. That's incredibly self-deprecating and egotistical all at once. That somehow *I* was so important as to have the ability to destroy someone. Perhaps it is not on me that she now talks to dogs. It is also judgemental and petty to think that her talking to dogs is somehow evidence of destruction. What does it say about me that I feel these things? I started to really crawl inside my mind and just as I was about to begin some internal healing...our food came.

The secret weapon of Stewart's Busy Apron was butter. Lots of it. 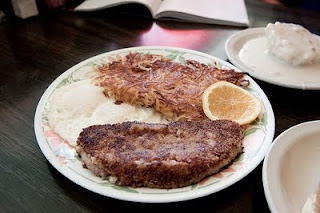 Our hash browns were buttery. If it weren't for the butter, I suspect they would have been rather bland. They came out a bit too square and flat, which makes me suspect they were the frozen kind. Charlie's corned beef was also most likely from a can but it tasted like corned beef hash should--just a little grainy, just a bit soggy. 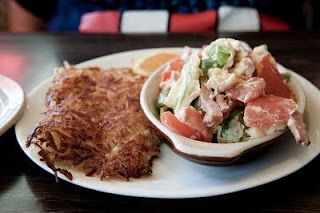 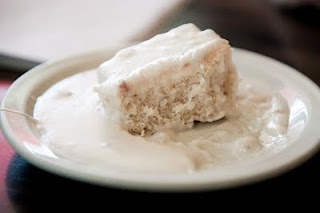 My "Eggs Ala Heavy" looked nothing like I had imagined. I thought maybe the "casserole" was really just a fancy way to say "scramble" or maybe something more fluffy like the "messes" on the menu at Millie's. I estimated it was likely a single egg that went into the pan with the long strips of ham and chunks of pepper and tomato. It was good at first, but as I ate my way down into the bowl, I discovered the pool of butter the food was soaking in. It become far too rich for me.
The biscuit was the kind you would pull out of a package from the super market. It was very soft and spongy. The gravy tasted like a powdered mix which was expected, but still disappointing.

I had really hoped Stewart's Busy Apron Coffee Shop had turned out to be one of those unexpected wonders of diner-fare. In the end, though, it only had one thing going for it: it was cheap. Otherwise, it was adequate American comfort food made by Asian-American immigrants. There are a lot of those places, especially in the Inland Empire and in Orange County. That's a good thing, because not only does it give me places to go eat, but it also gives us dishes that may become new American classics.
Who knows, maybe Eggs a la Heavy is the next Biscuits and Gravy?
Food: Okay.
Service: Friendly but spotty.
Price: $5-$8
Pie: No pie.