Yermo California might be the most depressing town I have ever seen. On my way back from Vegas last month I decided to take the scenic route through the town. I had never seen so many abandoned and boarded up homes in all my life. It was like wandering through a town in Fallout 3.

Yermo does have two saving graces though--the two diners located right off the freeway exit. They are Peggy Sue's Diner which I reviewed last year and Penny's Diner. Well, maybe Penny's isn't so much a "saving grace" as it is a "decent option if Peggy Sue's is not available."

I do like that Penny's is a classic art-deco chrome diner. There are not a lot of those left out here in California. Stylistically alone, I give it points. 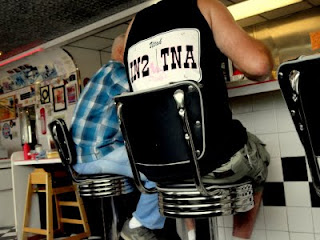 I think this is where the Yermo locals eat, leaving Peggy Sue's to the tourists.

I asked about the Dody's Vegas Jack sandwich. The waitress--a sweet girl--had no idea what I was talking about, so I showed her the menu. Apparently she had never seen anyone order it. Bad sign, maybe? But it was just a turkey melt with some green pepper, I don't know how that could go wrong. I ordered it and then got to overhear the cook asking what was on it and how to make it. Seriously, NO ONE had ever ordered this sandwich? An older waitress--sweet girl's mom--had to explain how it was made. 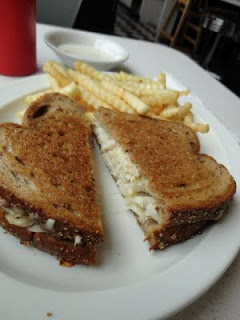 I got the sandwich before too long. It was okay. The cook forgot the green peppers... which is kind of the thing that would make it not just a turkey melt? I bet it would have been good with the peppers. Oh well. I thought the number of french fries on the plate looked puny, but they tasted all right. 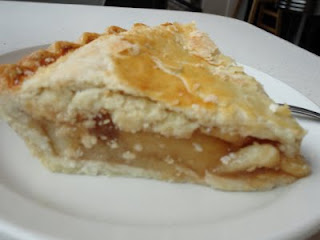 I also got a slice of apple pie at Penny's. They had some homemade looking pastries on the counter and I could see some pies in a case behind that so I got my hopes. They were dashed when I saw in the reflection of the case a store sticker on top of the plastic lid of the pie. Meh, it was supermarket apple pie--dusty crust and nothing to taste but cinnamon.

Across the street, Peggy Sue's is this spectacle that harkens back to the old days of road-side attractions, while Penny's Diner is just there for you to get some food and move on from the most depressing town I've ever seen.

Posted by Mike Tanner at 8:49 AM No comments: 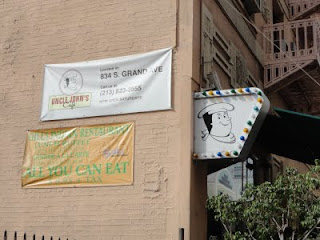 I never ate at the original location of Uncle John's Ham n' Eggs and after missing my window with "Jail Denny's" becoming Nibblers and now going back to "Jail Denny's," I didn't want to miss out again. The economy being what it is, places can disappear over night.

Now located next to and connected through the lobby of the Stillwell Hotel, I was surprised at how nice the interior was. I knew the reputation of Uncle John's as a greasy spoon and this did not match that. I hoped the new location had only changed the environment and not the content. Once the waitress handed me the menu my fears were allayed. 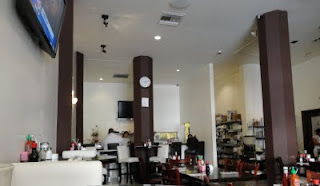 Uncle John's serves both American and Chinese food. The menu has Chinese dishes on one side and American ones (primarily breakfast but also some lunch items) on the other. Well, there is a little bit of bleed over from one side to the other. For example; most of the breakfasts have as an option either potatoes and toast or rice. The prices were very reasonable for a place known for large portions. Most of the entrees were hovering around $8 or $9.

Of course I had to try one of these...ugh, "fusions" for lack of a better word. I decided to go in a little bit different direction. I ordered the spicy fried pork chop (so spicy it had to have a chili pepper icon next to it on the menu) and eggs. I decided to go with the potatoes and toast option, rather than rice. 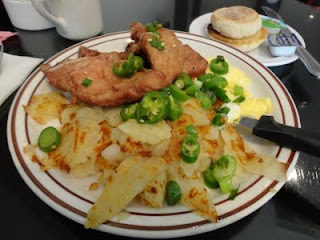 The pork chops were really good. Normally, I don't like breaded meats because the breading tends to be soggy and greasy, but surprisingly these were not like that at all. The breading was crisp and actually reminded me of chicken McNuggets (which is secretly my favorite fast food item). My eggs were undercooked and disappointing, though. The potatoes were pretty standard--not good, not bad.

I didn't find the portions to be anything out of the ordinary but I did wish everything had come out on a larger plate. It was just a big pile. I imagine the peppers went with the pork chop, but the scallions left me wondering. Were they part of the pork chop portion or were they supposed to be for the eggs? Maybe for the potatoes, since they needed a little something?

After finishing my meal I sat for awhile and enjoyed my coffee and--by god!--I paid for that full hour on the parking meter and I was going to use it. The staff kept my coffee full the whole time.

Uncle John's Ham n' Eggs is a decent greasy spoon with over a 30 year history. Not too long ago this was probably one of the few places in downtown that you could get a hearty breakfast that wasn't at a chain restaurant. I think it still services a need for folks who live and work down there. I mean, where else can you get some fried rice with your hotcakes? 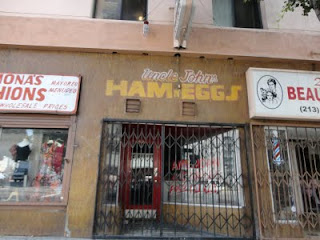 Dinerwood on the Road: Best breakfast in San Diego is in Chula Vista

On the annual pilgrimage to San Diego Comic Con, me and mine stay in the lovingly rundown city of Chula Vista just south on the 5 freeway. Our usual place was booked up so I found place a few blocks away. Now, when I booked the Big 7 Motel I swear it had a 2 1/2 star rating on Expedia--which I was fine with since I only planned on sleeping there not eating off the carpets. During the approaching months I watched that rating eek ever lower. By the time Dinerfriends Greg and Paul and I checked in, I knew we were in for a crapbox of a stay. 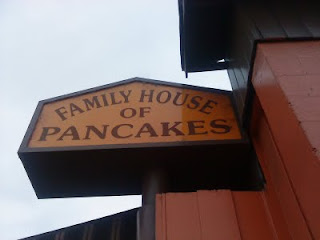 Family House of Pancakes. If you want to just cut to the chase, let me say it: This place has the best breakfasts in San Diego.

On the first day it was just Greg and I and we had no idea what to expect. 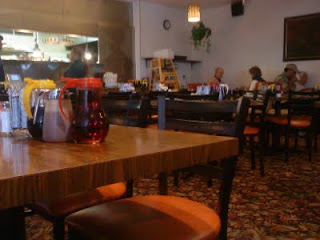 It's a cozy joint with a charming decor ripped right out of a 70s movie.

Waitresses greeted patrons by first name and knew what they'd want to order the minute they sat down. Seriously--one of the waitresses basically did a magic trick. She asked this woman what she wanted and when she replied, the waitress said "I knew you would want that. In case you don't believe me"--she turned her notepad around for the woman to see--"I had already written it down." MAGIC. 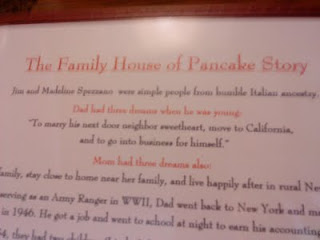 To summarize the story: Dad had dreams of opening a restaurant although all he knew how to cook were pancakes. He realized his dream and learned that you should not open a restaurant when all you know how to cook are pancakes. The restaurant struggled until dad died. Mom, heretofore only a homemaker, came in to try to run it. She struggled too and it took the whole surviving family coming together in order to make it even function. Now they do okay. 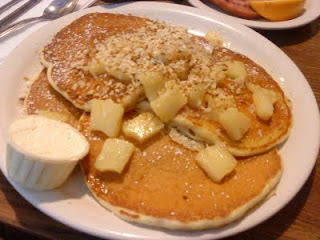 On the first day I ordered the Tropical Pancakes. Pineapple bits in the batter and on top along with toasted coconut. This was heavenly. 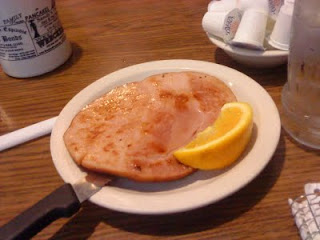 To get some much needed protein to go along with my powerfully carb and sweet pancakes, I ordered a slab of ham. It was delicious. 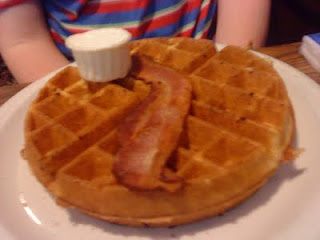 That morning Greg was a little under the weather and honestly felt more like plain toast and tea but the lure of the bacon waffle was too much. Nice chunks of bacon were mixed in with the waffle--you would think that would go without saying right? I have unfortunately ordered a bacon waffle at places and that just means they lay some slices on top and call it a day. This had a perfect balance of sweetness in the waffle to work with the bacon chunks inside.

The next morning we ate downtown (Cafe 222 review coming soon), but on our last day we made a point of going back to Family Pancake House. This time we took Paul with us. 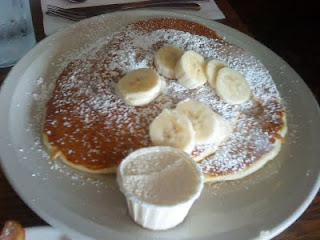 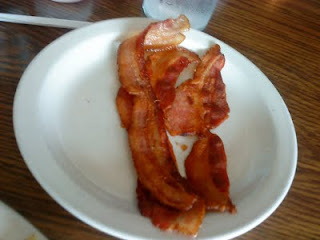 Paul had the banana pancakes with a side of bacon. His pancakes were almost as good as the ones I had two days before. 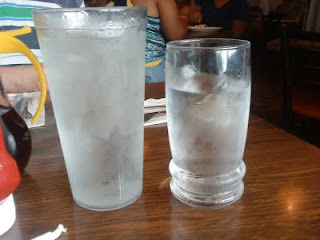 Whereas Greg and I ordered coffee (it was decent--not great), Paul ordered only water. They brought his water out in a gigantic cup. I think that actually says a lot about the thoughtfulness of the restaurant. 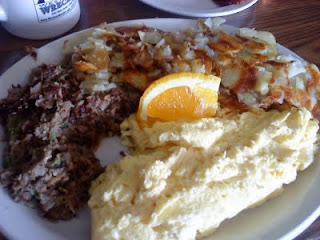 I had the roast beef hash with eggs and potatoes. I believe the menu said '2' eggs--this was easily 4 or 5 eggs. The country potatoes were thin cut and walked delicately close to crispy. The hash was a tiny bit salty but otherwise everything was delicious. I ate maybe half of what was on my plate and I was bursting. 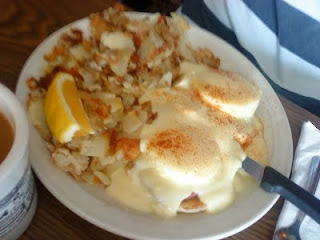 Greg, fully recovered from his illness of the other day, was the big winner at breakfast. He had the house speciality Irish Benedict. The menu said "corned beef" for the meat portion and we had assumed they were using short hand and it would be corned beef hash, but we were wrong. It was actually hearty cuts of actual corned beef. It was amazing. The waitress (the one who did the magic trick the time before) looked at Greg and said "I know what you're ordering next time you come in. I'll remember." No doubt she meant it.

When our waitress brought out our food that morning she apologized for the delay. We had waited maybe ten minutes--I think it was probably closer to five. Their turn around was blindingly fast.

I love Family House of Pancakes. I was actually upset that it took four years to find this place and I had to eat at Aunt Emma's Pancakes more than once. This is officially my breakfast headquarters when I'm in San Diego. Now I just need to find a slightly better motel to stay at nearby for SDCC 2012.