Flappy Jack's Pancake House: Get your kicks and your pancakes on Route 66.

Route 66 is the most iconic roadway in the country, maybe the world. It has a long time feud going with a very jealous Autobahn. Numerous songs have been written about Route 66 and it even starred in its own tv show. The Autobahn only has one song. And although Route 66 probably runs over its fair share of ancient Indian burial grounds, it still holds the moral high ground over its Germanic foe. And somewhere a punch-drunk Silk Road is wondering 'what happened?'
Number One Diner Companion Antoinette and I went for a drive down historic Route 66 looking for a breakfast joint. Once the bloodline of travel through the southwest, the 66 is now bypassed by most in favor of the freeways. The closer you are to civilization, the more common it becomes with strip malls, Jiffy Lubes and other trappings of the suburbs. Although traffic has changed, we knew that a classic eatery must be along this legendary road. 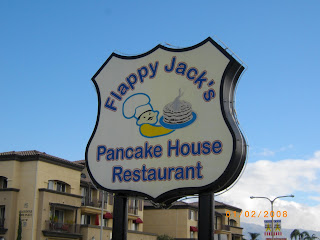 When I saw the sign for Flappy Jack’s, I knew we need not travel farther. This felt good. This felt right. Then when I saw the crowd of people outside, about 20 to 30 strong, I felt really annoyed. 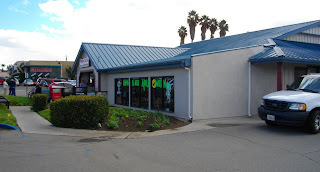 Lots of people waiting could mean a few things: maybe the food is really good; maybe the service sucks or they are overwhelmed; maybe the after-church crowd is just really lazy and doesn't want to eat that far away after visiting God's House.
I ducked inside while #1DC Antoinette parked the car. I asked about the wait and was told 30 minutes. I put my name in and was handed a restaurant beeper. 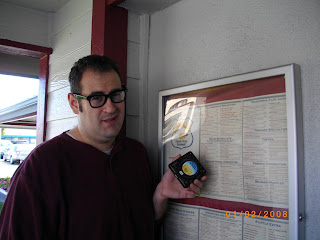 I am not a fan of restaurant beepers. Ingenious idea for an Outback or a Red Lobster, it's practical but impersonal. I want someone to have to shout out my name and look anxiously around for a minute to see if anyone responds. I want someone to then look annoyed and peer around after shouting out my name a second time before I respond. This is what I like.

After waiting the full thirty minutes and looking over the window menu time and time again, I went back inside. Just as I was about to ask how much longer it would be, the beeper—which did not beep—flashed its red LED lights and vibrated in my hand. I felt like I had just won something. I had just won not having to wait anymore.

The walls of Flappy Jack’s are painted with scenes of the high points of Route 66: woody station wagons, car hops and...Al Capone. 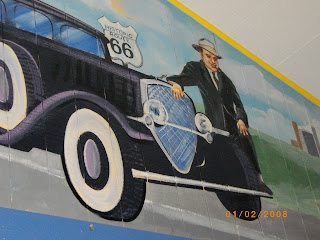 Having had more than enough time to look over the menu, ordering was easy. At the window menu, my mind might have changed a dozen times, but one thing was for sure: I knew I had to get pancakes. It's a pancake house, after all. The only problem was, what kind? I thought the strawberry stuffed pancakes would be a winner. Or maybe the bacon pancakes? Then when we sat down I saw the placard for the seasonal Pumpkin Nut pancakes! Seasonal pancakes always win out. 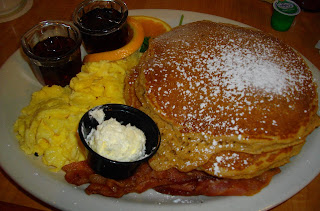 The pancakes had a nice subtle pumpkin flavor. It's hard to get pumpkin just right. The walnuts added a nice crunch to the pancake in almost every bite. I had been hoping for something a little special with the syrup, but it's just not that kind of place. The eggs were decent and the bacon was crispy without crumbling into bits.

#1DC Antoinette ordered the french onion soup and the turkey avocado melt. Our waitress brought out a gang of packaged crackers, including rye crisps, my favorite restaurant crackers ever. I promptly made Antoinette load up her purse with them. The soup also came with a large thick slice of bread to sop the soup with. She thought the soup was good; not earth-shattering, but good. 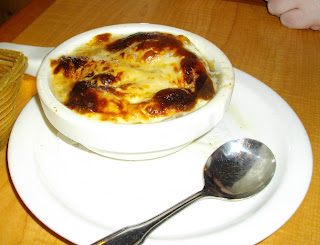 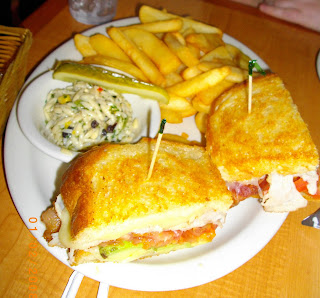 Interestingly the pasta salad that came with the sandwich was made with orzo pasta and included pine nuts, which seemed very frou-frou for a place like this. The sandwich itself was decent with fresh tasting ingredients and thick cut bread. The fries were nicely golden and crispy.

Flappy Jack’s was good. It is clearly a popular place in Glendora. A lot of people eat there. A lot of people eat at Dennys and Chillis, too. I was only disappointed that it wasn't more homey. It really lacked charm. It seemed stuck in a weird middle place of classic family dining and trying to appeal to..well, to people who go places where they give you beepers. 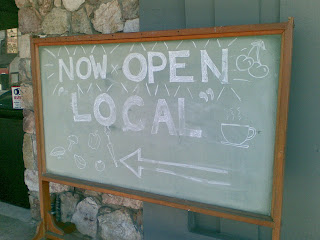 Local opened just a few months ago in the former location of an antique shop. The owner was once a cook at Cobras and Matadors and thought that, since the antique business wasn't doing too well, he might as well try his hand at a restaurant. I had actually been there when it was an antique store, and I have to say...

...it was better as an antique store

Local has an interesting set up, since it works basically like a fast food restaurant. You walk inside and order at the counter, then take your number and find a seat, which is offered on the side patio, or out in front on the sidewalk. 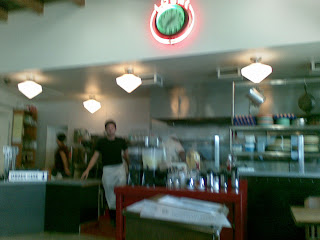 You may also get your own salad from the salad bar, but neither Number One Diner Companion Antoinette nor I ordered salads. 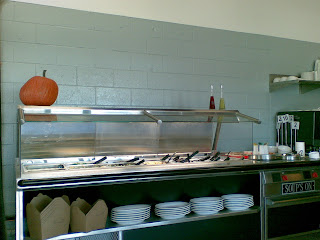 We both got coffee, though and were excited by the gargantuan mugs. We took our mugs to the coffee fixin's station and I was impressed to see real simple syrup available. We were sorely disappointed to find the coffee was bitter and had an odd chemical aftertaste. 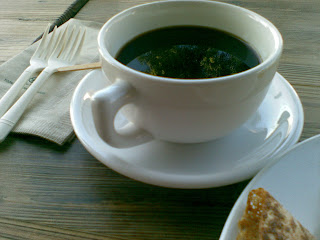 I ordered a crepe with red bell pepper, sausage, jack cheese and onions. It came with home fries and toast. Now, the home fries were good and no one can ruin toast, short of burning. The crepe was uneven with the top half consisting of nothing but pepper and onions and the bottom being where the sausage and cheese was hiding. Overall it was decent--just decent. 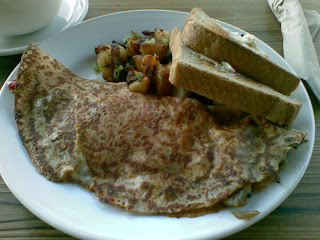 Antoinette ordered the brioche french toast with yogurt and fruit. It was a nice blend of fruit, but terribly bland. Their local supplier definitely picked before the pique of ripeness. The yogurt was fine: unsweeetened and unflavored. The french toast, however, was nearly inedible. I like soggy french toast. I like the bread to have soaked up the batter like the military industrial complex soaks up our national budget. I'm not saying I can't enjoy it if isn't sopping wet, I just have a preference. This french toast was barely 'kissed' by the batter, and the batter it was kissed with was foul. After three bites, Antoinette felt nauseous and gave up. 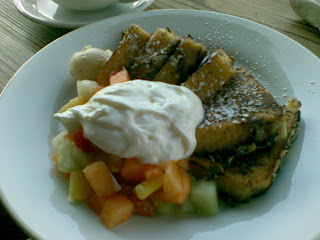 I attempted to finish my meal, but it was hopeless. We couldn't even force ourselves to gulp down the remaining $3 coffee. 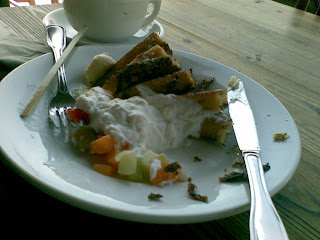 There is really nothing to make me recommend Local. Yes, the idea of local ingredients, farmers market goods, blahblahblah is all well and good, but there are a lot of places that do this already--and do it well. In a world with Auntie Em's, Madame Matisse, and Square 1, there is just no reason to dine Local.

Food: Not so great.
Service: You serve yourself, although they do come around with coffee refills. I doubt anyone takes them up on the offer, though.
Price: Far too expensive. $32.00 for two moderately portioned, barely edible breakfasts and bad coffee. No. Just no.
Pie: None.

Special thanks to our friend Dan Koeppel for the inside information on Local's back story. Visit his website: http://www.bananabook.org
Posted by Mike Tanner at 11:00 PM No comments:

On the Road Update: We've lost a good one.

I just found out that Vancouver Washington's Stardust Diner closed at the begining of the month.

Read my review of it from last year and mourn the passing of one of the good ones.

Stardust Diner
Posted by Mike Tanner at 9:17 AM No comments: