On the Road: Portland and Vacouver's diners: Fat Dave's, Jam, and Stardust

Here's another long in the hopper, "On the Road" edition from my trip back in October.

After my long stint in Spokane, I crossed the state by plane,rented a car, and headed south to see my friend Greg (whom you may remember from the Joe's Diner review) in his new town of Vancouver, Washington. It sits right on the border with Portland, Oregon, also known as "the city that freeway planners forgot." I also took the opportunity to visit my old college friend, Amber. In a mere day and half down there, I hit three diner/breakfast joints. 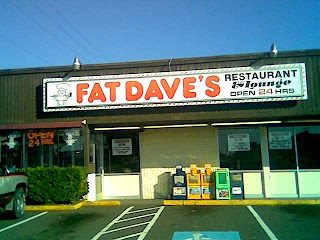 First off, Amber took me to Fat Dave's Restaurant and Lounge. Apparently the place had just recently been upgraded from "dive" to "slightly musty." We rolled in about mid-afternoon and were just about the only people inside, aside from a regular, or at elast the kind of guy who looks like a "regular," be it at a lunch counter or a bar at last call. 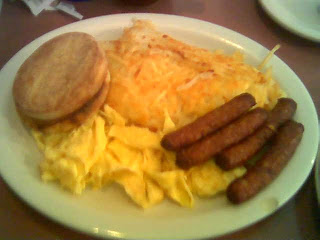 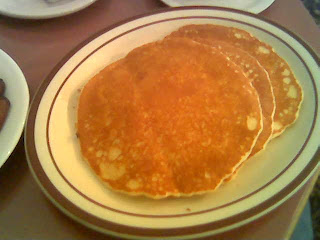 I got the "Fat Dave's Special" which included 3 pancakes, 3 eggs, sausage, hash browns, and toast. Amber got the cheese omelette(picture lost to the hard drive ether), which included just about all the same sides.
The food was unremarkable for the most part. The hash browns were the stand out, being a thick mound of potatoes. Shredded at some point but then packed together tightly for their time on the griddle. It was still on Hash brown Road but pointed toward Latke Blvd.
The coffee was good, but an incredible oddpoint: you were only allowed one refill on sodas. Coffee is flowing like the mighty Mississippi, but soda levels are down to LA River measurements.
The best part of Fat Dave's is the stained glass window that adorns the dining room. 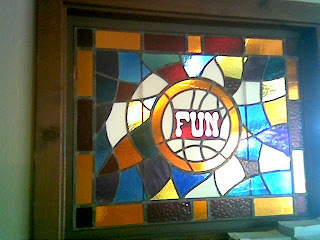 Says it all really.

For dinner that night I hooked up with Greg and he took me to the Stardust Diner. Don't let the sign fool you. It is not called the "Blurry Something D-R." My camera phone is not kind to me at night. 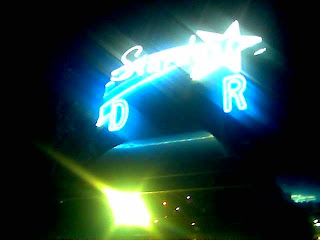 Like San Diego's Studio Diner, Stardust is of the shiny metal variety. This place even decorates for desserts. The entire staff appeared to consist of teenagers. At first, this was a bit disconcerting on account of how shitty teenagers are at everything except screwing shit up. However, they proved to be highly intelligent and thorough food workers. 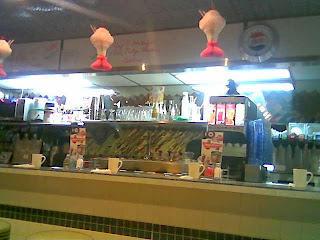 The only low point of the service was at one point they all seemed to disappear to go sing "Soulja Boy" in the kitchen. Jut out of frustration, I was about ready to Superman some hos myself.
I did really like that the Stardust Diner had its own newsletter. 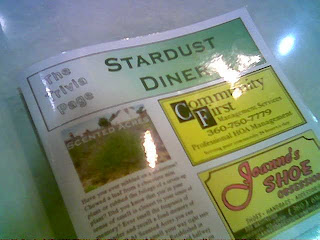 I took a chance and ordered the Philly Cheesteak. Our waiter asked if we wanted to try their new curly fries. He was really excited about these curly fries. I opted in. 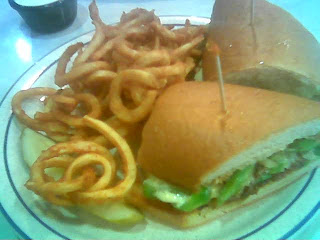 Greg had the bacon cheeseburger. Greg got the curly fries, too. The waiter was just too excited about these for us not to turn him down. 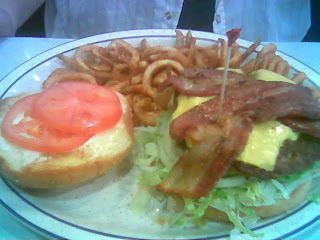 The food was only okay. Both of our meals felt overly heavy in our stomachs. So much so, that having after having opted in for the curly fries, we had to opt out of a dessert.
I felt bad because, as I stated earlier, they totally decorated for their desserts.

Check out their website. Warning: rock and rolling from the get go. Turn your speakers down.
http://www.stardustdiner.biz/
1110 SE 10th Ave.
Vancouver, WA 98683
ETA: Stardust has since closed down. Bum news.
Jam on Hawthorne is probably known to most modern Diner aficionados. It was featured on the "Diners, Drive-Ins and Dives" show on Food Network.
This eclectic little breakfast joint is nestled in one of Portland's fine hip neighborhoods. Greg and I stopped in about mid-morning on my final day down on in the P-Land-O. (I just made that up. Can people start using it for Portland Oregon? I think that would be cool.) 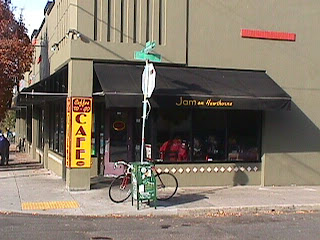 Jam has a nice neighborhood vibe. I would say it's Portland's Square One, or rather Square One is L.A's Jam. Hipster clients mixed in with regular folks and soccer moms who just got out of their Pilates classes all gathered for breakfast here. 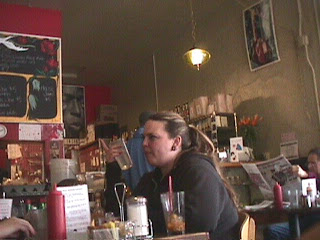 I had to break out of my current breakfast rut and try something new. No, no, no, nothing as drastic as a fruit cup or a bowl of granola--Close, though.
I ordered the VEGAN blueberry pancakes. WTF! OMG!! Vegan! Yes, I ordered them and ate them and they were good. 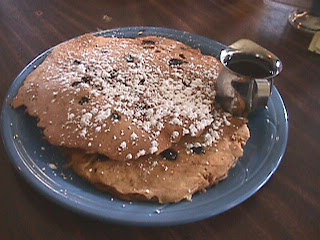 Greg got the famous Corned Beef Hash breakfast. This was not dog food. This was high-quality (so high-quality I want to put an accent mark somewhere on it) corned beef. Moist, but not mushy; salty, but not briny. It was m-f-ing, Campbells Mmm Mmmm Good! 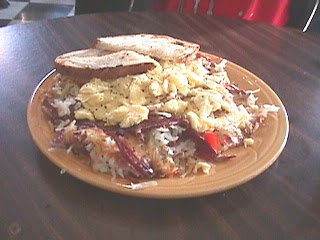