Check out the bottom of the Corky's review page. It has been positively updated!

Look for the long awaited Auntie Em's Kitchen review to be posted on Monday.
Posted by Mike Tanner at 1:08 PM No comments:

Richie's "Diner"- The word doesn't mean what you think it means. 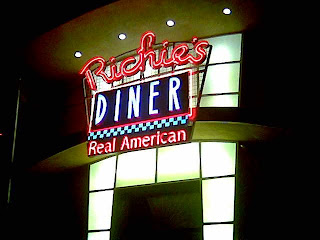 This place is too shiny, and not East Coast Diner shiny, like dads with sandals and socks and daughters with low-rise jeans shiny. It's suburb shiny. Calling it Richie's Diner makes my teeth ache. There are hints there that it used to be something special, that somewhere there might be an original Richie's that doesn't grate on my sensibilities. [And apparently there is- http://www.richiesdiner.com/ two locations in northern California where the pictures seem a bit more faux-authentic. Oddly the website does not list the location I went to in Rancho Cucamonga.]


It was a busy weekend night when we strode in, might have even been the opening weekend for Richie's here. There was that kind of ridiculous energy in the air; the kind you might find at a Wal-Mart opening or a Gottschalk's sale. We put our names on the list and waited.

And we waited in the cramped lobby where they teased us with an apple cider dispenser and tiny Dixie cups, only to find no unused cups and an empty jug of cider.

Richie's also sells salt water taffy by the sack. Sure, why not. Do what you gotta Richie's.

It became quite clear after half an hour or so that we had been skipped on the list. We approached the frazzled man at the counter. When he realized that he had skipped us, he tried to say he had called our names, but the looks on our faces and his realization that we had never been more than ten feet from the counter made him quickly abandon that tactic.

Normally, with even that much time invested, I would have hit the bricks, but Ritchie's promised me something. On their crowded front counter were an assortment of unique sodas, including my old favorite, Green River Soda. Part of my childhood all the way up to high school, the Green River Soda was MY drink. I haven't had a Green River, especially from the bottle, in a long time. Too long, old friend. I had to stay. 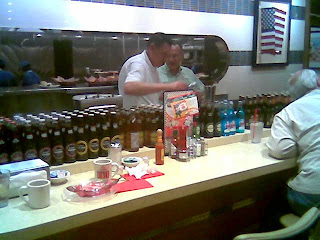 Finally, we were taken to a table through the generic, could be a Chilis, could be a Macaroni Grill, could be the third circle of hell, dining room. 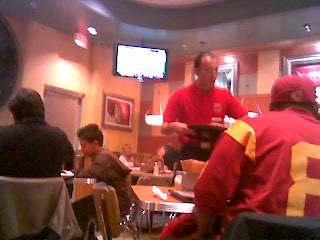 Looking over the menu, we found the traditional American favorites with only the occasional TGIFriday's influence.

One of us ordered the open faced meatloaf sandwich, substituting french fries for mashed potatoes. The other ordered the pot roast sandwich. We had been waiting so long and were so hungry, I actually forgot to take a picture until we were nearly done. Neither of these meals were impressive, or reall all that good. Plain and generic tasting. And please note; they messed up and gave us both french fries. 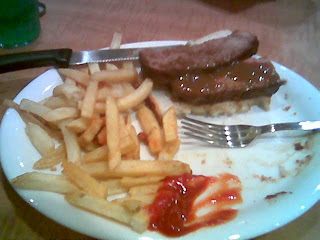 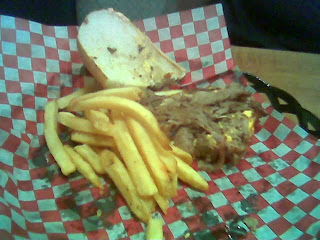 But oh sweet Venus, my green bottle love came to me and I did drink her up. Sugary syrup with tiny champagne bubbles. Sigh, what dreams may come. 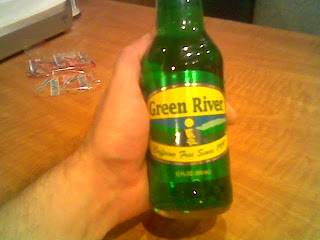 We waited a very long time for our check, so long we decided to ask for it. What a foolhardy move that proved to be. Our waiter had forgotten to print it out. We could have walked out and there would have been no evidence except for our left over food stuffs...Yes, I did take the Green River bottle with me.

I cannot recommend Richie's Diner because I won't recommend any chain restaurant to anyone for a meal. You can call it a "diner" all you want Richie, but that don't make it right. And do not get me started on what the hell "Real American" means.