Update 7-28-10: In this modern world, sometimes things change. The bottom becomes the top, what was right is now wrong, your aunt becomes your uncle, your uncle becomes your aunt.
Keith's in now an Aunt Emma's. 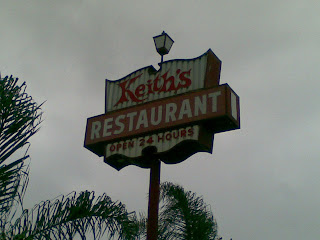 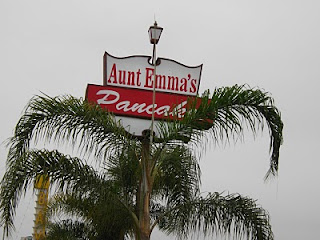 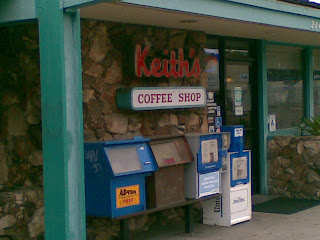 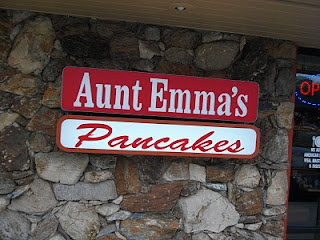 Original review-
Dammit, Keith make up your mind! Are you a restaurant or a coffee shop?

Either way though, you're pretty cool.

Last year when I was in San Diego for (NERD!) Comic Con, I saw the sign for Keith's from the freeway several times but never had the chance to stop. This year, however, I made it an agenda item to hit this place.

Keith's is something like a chain with two locations in the San Diego area. Number 1 Diner Companion Antoinette, her brother, Diner Lad Alex, and I hit the one in south San Diego off the 5 freeway. Technically it is in National City. It's kind of weird to have a town named National City so close to an international border. Seems almost hostile. 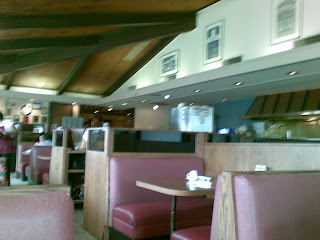 Keith's is a locals place. Neighborhood folks walk over for breakfast or stop here after church. Because it's this kind of place, you'll find a homey charm and a genuine friendliness to the staff. I will say that at 9am on Sunday it wasn't very crowded. Was it a sign? We were sure we liked the atmosphere but atmosphere does not equal quality of food.

And of course, they have a crane machine by the door. #1DC Antoinette noted that the claw was too loose to really grab anything. Save your dollars.

Regular readers will remember that I go ga-ga over places that start off with a coffee mug on the table and all you have to do is turn it over to indicate your desire for coffee. Keith's does this. And their coffee has a nice mellow flavor. Diner Lad Alex ordered the hot chocolate and said "This is the best hot chocolate in the world....at least at the bottom." He's 13, he doesn't like anything, but he likes the bottom... of this hot chocolate. A lot. They gave him a hot chocolate refill for free, which was great and rare for any restaurant. 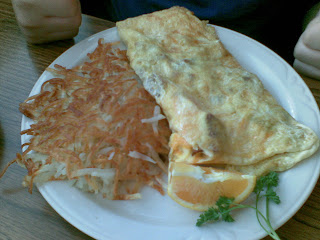 He also liked his simple bacon and cheese omelet. 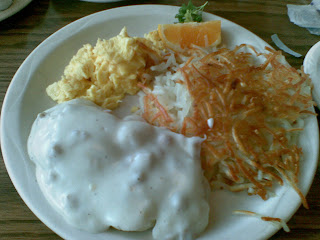 I ordered the biscuits and gravy with one egg and hash browns. It didn't blow me away, but it was good. Walking in, I knew the food at it's best would be "good." I was just glad it wasn't awful. At this point Keith's was just so enjoyable, I didn't want it ruined by the food. 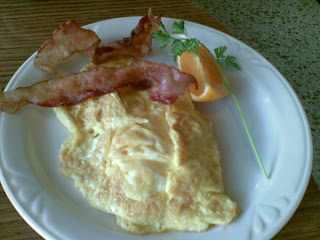 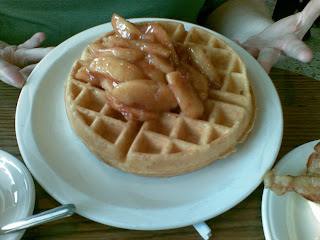 #1DC Antoinette was especially hungry this morning and went with eggs (scrambled well), bacon and an apple and cinnamon waffle. She was really impressed with the waffle. It's far more common to have a disappointing waffle.

The pie was served warm and had delicious flaky crust (I'm not usually a fan of flaky crust) but it did get mushy toward the bottom. I liked that I could tell that the apple cinnamon from the waffle was not the same recipe as for the pie. 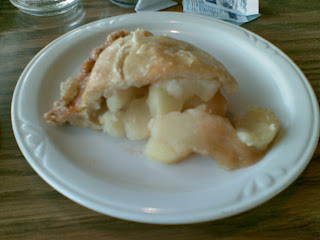 Keith's was a no unnecessary frills, comfortable place. You're not going to get any surprises here--well unless you manage to get something out of that crane machine. You'll have a decent meal in a friendly environment, along with some good coffee.

I saw the sign from the freeway and thought- "Whoa- I don't remember being able to see an Aunt Emma's sign from here...now where's the Keith's sign...Ohhhh.. Oh." My fears were confirmed when we drove up.

I asked the waitress how long it had been since the change-over and she said almost a year exactly. So basically right after the last time we ate there. 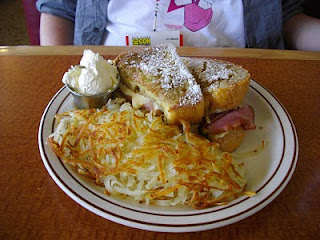 Greg ordered a Monte Cristo. The sandwich was good, but didn't come with any jam. He used the strawberry syrup in its place and that made up for it. The hashbrowns were not every good, not crispy and cold on the inside. 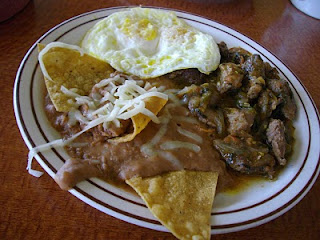 I ordered the special which was "bisteak ranchito." It was chunks of steak in a pico de gallo like sauce with re-fried beans, an egg and tortillas. It was really awesome, quality chunks of meat and really flavorful. 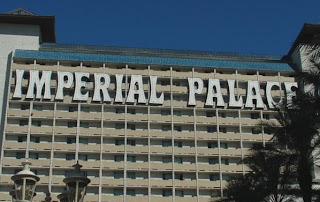 Vegas is not my friend. Last time I was here, it robbed me a of a month's rent. This time, it kept me up for 24 hours straight. At 7 am, half drunk and wandering the Imperial Palace casino floor, I was the last of my tribe in sight. Not terribly hungry but needing food, I searched for the sign that would tell where to go to get some food-- Teahouse Coffee Shop. A coffee shop? An opportunity to make it mean something to be up this late... this early?


I staggered, out of exhaustion, not inebriation, to the escalator and took immense pleasure in not having to move for the ride up. I stood by the entrance for moment before I startled the hostess with my presence. Apparently my staggering was stealthy. This woman would not survive the zombie apocalypse. Despite the hour, the staff was all bright-eyed and bushy-tailed. I guess they hadn't been in the Mai Tai bar off the lobby since midnight.

Maybe it was just me, but I couldn't tell what they were going for decor wise. It's at the Imperial Palace, which is Asian themed (it vacillates between Chinese and Japanese) and the place is called the Teahouse Coffee Shop...there's a lot going on there. Basically what you get is a pastel-ly, strip-mall looking Japanese restaurant that doesn't serve Japanese food but rather American diner favorites. 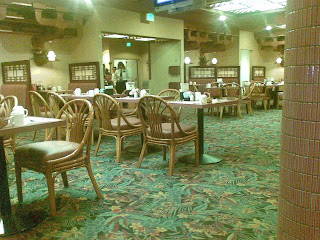 I call this face "Uggh." 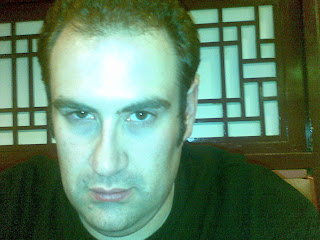 So first thing I did after sitting was order a coffee. I then inquired if they had any breakfast specials. I had just missed the cheapo Vegas-style full meal for 6.99 by 30 minutes. I ordered the Silver State Skillet. Two eggs served over a "casserole" of sausage, pork and bacon on a bed of hash browns. It sounded like such a good idea. That's a gang of pig!

First the coffee came...straight from the pit of hell. This was the hottest cup of coffee I had ever been in uncomfortable proximity to. Was it good, though? No idea! It was so hot I could barely sip it. It seemed weak though. I guess casinos don't like you to be alert.

Then the food came. Awww, a flower. That's precious. 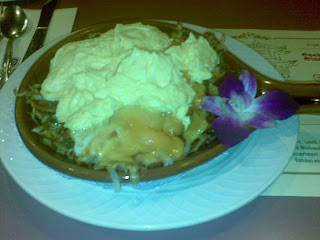 The food sounded like a good idea. In truth, the food was fine. Nothing special, nothing to recommend. It's a Vegas casino breakfast. It put food in me and it didn't come back to haunt me. 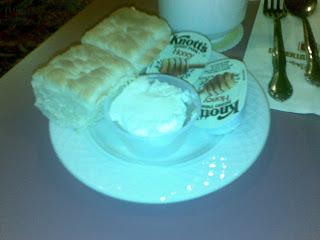 The only disappointing thing were the "biscuits." They sucked. Get a load of the scale of these tiny dust-tasting things. Almost 3 bucks for that. I got a better return on my investment of three bucks into the video poker machine that I randomly pressed buttons on for a minute before I crapped out.

Still not that good. 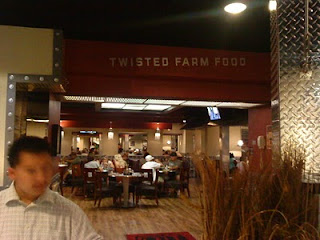 The interior is completely remolded to fit in with the Hash House A-Go-Go aesthetic. 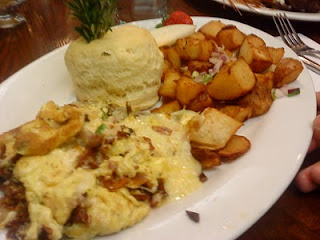 The food is still presentation over quality. Although, I do really like their biscuits. That right there is an improvement over the previous version of the restaurant.
Posted by Mike Tanner at 2:58 PM 2 comments: