Heritage Family Pantry - You could live on this bread alone. 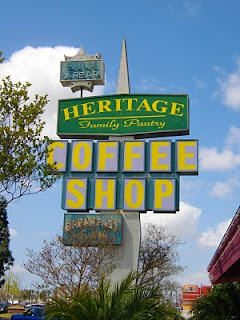 I found Heritage Family Pantry while searching for a place to eat near Long Beach. #1 Diner Companion Antoinette and I were picking up her sister, Carolyn, who was visiting from New York. A few days before, Diner Friend Lidia said, "Hey if you ever go down to Long Beach there's this place that makes amazing bread. It's called something like Family Pantry?" I replied, "Going on Sunday. Boom! Scheduled." 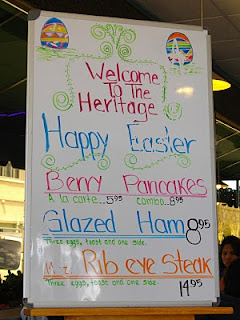 That Sunday happened to be Easter Sunday. Easter is kind of a big deal for some folks. It's a big going out to brunch after church or after sleeping in kind of holiday. We picked up Carolyn and headed to Heritage Family Pantry. 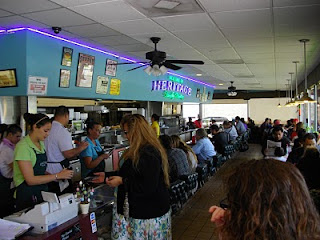 And then we waited for a good while for a table. It was packed. And oddly, even though H.F.P is clearly an "after church" inclined restaurant, with Bible written verses on the windows (pic below), there seemed to be more of the "sleeping in" category of folks there. 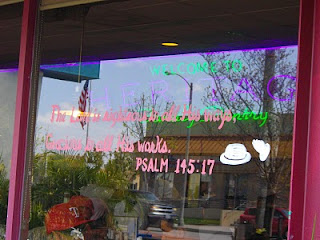 I've stopped being so shy about taking pictures at the table when I go out. When our waitress saw me taking pictures of the menu she stopped. "Pictures? You opening up your own place? Can I come work for you?" She was sassy. As we were leaving I heard her complaining loudly about being open past 2pm on Easter. "No one is coming in! They all ate already!"

Later, Diner Friend Lidia asked if we had had the "older, surly waitress with all the make-up?" Yes, we had. Apparently, she's legendary. 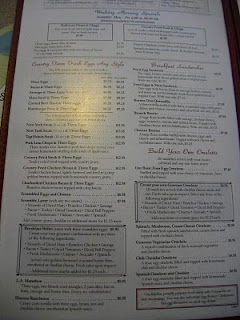 The menu at H.F.P. is pretty extensive, but nothing too crazy that made me say "I gotta try that!" There's a lot of emphasis on bread there since they do pride themselves on their homemade bread. 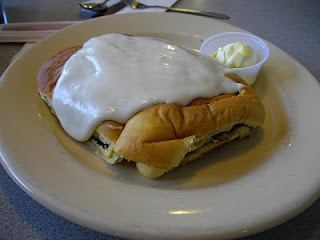 We all shared the cinnamon roll. It was rather bizarre looking when it arrived. I kind of thought it might be someone's biscuit and gravy. The roll was nothing like any cinnamon roll I have ever had. It was light and more like a bun than a roll. It was very good. The frosting was very buttery, but could have been a little sweeter. 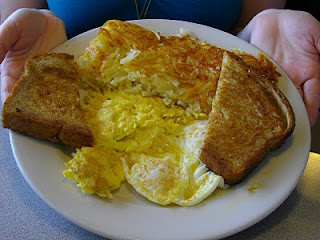 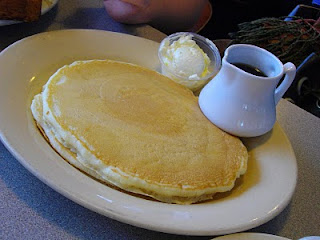 Carolyn had the three egg breakfast with hash browns and a side of pancakes. We thought her eyes might be bigger than her stomach, but she powered through and finished her main plate and took out most of the pancakes. The highlight was definitely the hash browns. They were crispy on the top and bottom and buttery in the center. Antoinette ordered the Roast Sirloin melt. The bread was amazing, first of all. Heritage Family Pantry makes their own and it is frankly some of the best bread I have ever eaten. Her sandwich was thick with meat and tomato. Luckily, she couldn't finish the whole thing so we took it home and I was able to eat it for dinner later. The french fries were seasoned with celery salt and were very good. 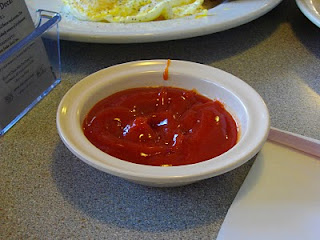 Curiously, they serve ketchup in a small dish--no bottles, which struck me as a little odd. 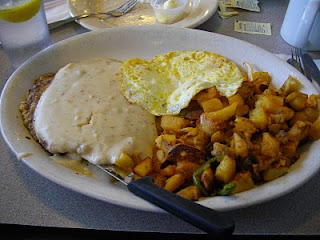 I went with the country-fried steak and eggs with a side of home fries. There are usually two ways you can go with country-fried steak: crusty tough leather or greasy slab (sometimes its both). This steak was perfect. It was still tender and even a tiny bit pink in the middle and the breading held to the meat. My eggs were also good. I ordered them over-medium so I could sop them up with my biscuit. The home fries were actually a little underdone and were the only disappointing part of my breakfast. 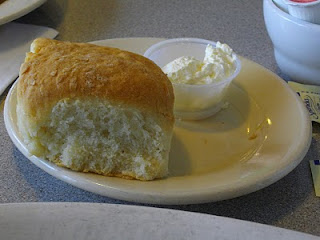 Heritage Family Pantry was a great breakfast spot. The food was definitely worth the trip and the atmosphere was friendly. Our waitress was the fun kind of irascible waitress you thought only existed in movies and sitcoms from the 70s. I highly recommend this place, even if only for the bread. My god the bread!