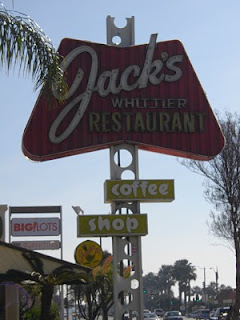 I saw the sign originally while trolling photo websites for "googie" tags. I never even noticed it on LAtimemachines.com, but it's there.

Real-life journalist David Allen and I met for breakfast a few weekends ago. I got there about ten minutes early and put my name on the list. I figured there would be a little bit of a wait, but there were only two parties ahead of us, so it shouldn't have been too bad. 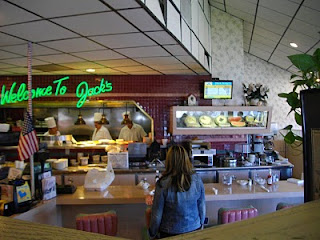 It took about fifteen minutes to be seated. Not the restaurants fault, though. Nobody was leaving! Everyone was just sitting there talking and relaxing, while a half-dozen of us just stood in the ever crampening foyer. David soon arrived and we took some notes on our surroundings as we had nothing better to do. 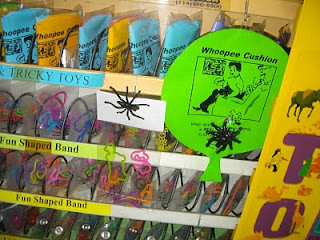 Along with a crane machine (not pictured due to the number of children in front of it--I think there's a law about taking pictures of children. If there isn't, there maybe should be), there was also this toy novelty dispenser. Whoopee cushions? This has got to be the fart-iest restaurant ever. 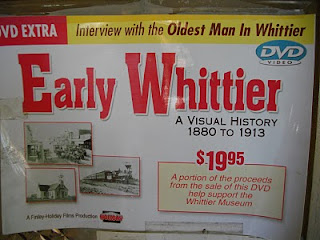 There's also this sign advertising a DVD interview with the "Oldest Man In Whittier." Or rather this is included as a DVD extra on one called "Early Whittier." I googled this video and found more information on it. The old man is Monte Wicker AND HE'S NOT EVEN THE OLDEST MAN IN WHITTIER! What the hecks! He's just the oldest guy they could find who remembered anything slightly interesting. This is Whittier, it's not like there was much to remember in the first place.

Finally, we were seated. I started out with some coffee (it was decent) while we looked over the menu. There didn't seem to be anything too exciting or out of the ordinary. It was a varied menu that covered the basics. I saw that they offered a loyalty rewards program and when you signed up for it you got a free slice of pie. I immediately asked our waitress how to sign up. I was dismayed when I realized later that I wouldn't get the free pie then--I'd be emailed a coupon later. Bogus.

Apparently they used to have a "at your table" toaster feature, but we saw no sign of it on our side of the restaurant. 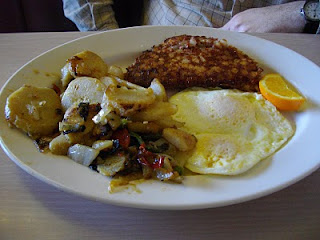 David ordered the corned beef hash breakfast. It was a pretty standard "canned" style corned beef. The potatoes were a bit oily for my taste. They should have been crisper. 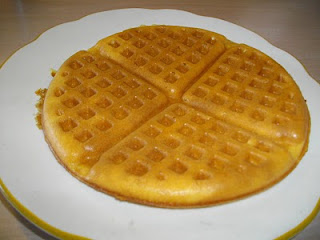 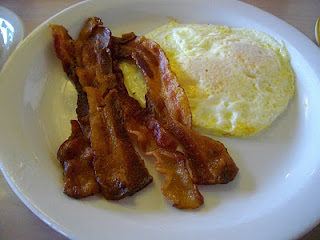 I was craving a waffle so I ordered their waffle breakfast combo. The waffle itself was interesting; it was perfectly smooth, save for the edging. It tasted like any other perfectly adequate waffle but the smoothness was fascinating. My eggs were slightly overcooked. The bacon was actually pretty good, I'll give them that.

I can't really recommend Jack's Whittier Restaurant. Only the exterior really holds the old school coffee shop aesthetic, so there's no nostalgia trip to be had. The food was uninspiring. The service was only okay.

I finally got my coupon for my free pie, but I don't think I'll use it. 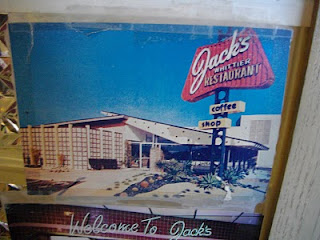